United Church Diaconal Ministers and graduates of the Centre for Christian Studies (and its forerunners) are eligible to apply.

The Kaufman Renewal and Emergency Fund is to help with the cost of retreat, reflection, renewal and rest experiences and to make possible a grant or loan for people who are in an emergency situation.

Emma was born in what was then Berlin, Ontario (now Kitchener) to German immigrants, Jacob and Mary. Her parents became prominent citizens of Berlin and supported many causes, including the YMCA and YWCA, as well as being active in their church. Following high school, Emma attended the Ontario Ladies’ College in Whitby Ontario, studying household science. Following  six months teaching cooking in Japan, she became a student at the Methodist Training School, graduating in 1911. In her second year, Emma was elected Class President. She did extremely well academically, but was also noted for her bargain hunting propensities!

Following graduation and further training at Teachers’ College, New York and Japanese Language School in Japan, Emma worked at the YWCA of Japan for many years. Although she was wealthy, she insisted on the YWCA paying her an adequate salary (which she promptly donated back) so that her successor would be paid adequately. She purchased land for the new Toyko YWCA, making it clear that she expected to be repaid, although without interest.

In 1940, Emma returned to Canada and worked with Japanese Canadians who had been interned as enemy aliens in British Columbia. She was the first Canadian to be a member of the World YWCA Executive, which asked her immediately following World War II to survey the needs of women in the Caribbean which eventually led to the development of YWCAs in Jamaica and Trinidad. In 1965, Emma received a citation from International Co-operation Year, honouring her for her services in international affairs, particularly in relation to Japan.

Emma had a lifelong commitment to deaconesses and to the Training School/Covenant College/ Centre for Christian Studies. She donated a substantial amount of money to set up the Emma R. Kaufman Scholarship through Covenant College, designed for School graduates to study outside of North America. She also made a large donation to help make possible the purchase of Kaufman House as a rest and holiday house. When that site was no longer suitable and the house was sold, the money from it made possible the building of Kaufman Cottage on the Cedar Glen, Ontario property – and later still funds from the sale of that Cottage became the capital for the Kaufman Renewal and Emergency Fund.

This biography was written by Gwyn Griffith, Weaving a Changing Tapestry, The Story of the Centre for Christian Studies and Its Predecessors 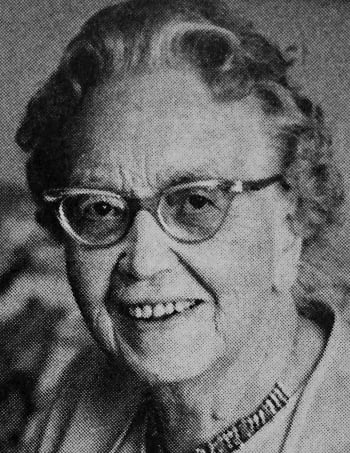