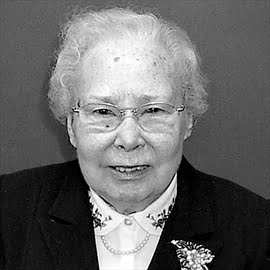 Jean B. Kellerman
Back to Index

Jean Kellerman was born in 1919 and died October 6, 2010, at Freeport Health Centre of Grand River Hospital, after a brief illness, at the age of 91.  She worked as overseas personnel  for 30 years, for a short time in China and then in Japan, first with the Evangelical United Brethren denomination and then with the United Church.  After returning to Canada, her congregation was Calvary Memorial in Kitchener, where she was in ministry before retirement. During this time she met and influenced many  people with her passion for the mission of the church. Later she was named Minister Emerita.