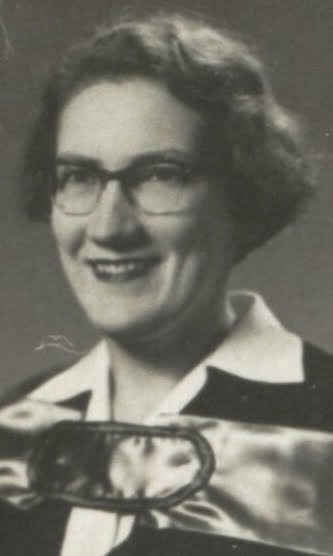 Audrey Cornell
Back to Index

Graduating from the United Church Training School in 1952, Gladys “Audrey” Cornell was a member of the largest class the school had ever had (picture of class).  She came to the school with the hope of a career as a Deaconess, but circumstances didn’t allow for that dream to materialize.  Her ministry rather was as a high school science teacher, a job she enjoyed and did well.

Audrey was born February 7, 1926 in Montreal.  She was the only child born to Irving and Gladys (Crawford) Cornell.  Her father was transferred to Truro in the 1940s and Nova Scotia became her home.  Audrey attended the Gaelic College in Cape Breton and received her Bachelor of Science from Mount Allison University. She then furthered her education at the Normal College in Truro and began her teaching career.

An active church volunteer, Audrey’s minister suggested that she consider a career as a Deaconess.  She was drawn to the possibility, not only for the work, but for the opportunity to travel to other parts of the country. Having saved up sufficient funds she made the decision to head to Toronto in 1951 to study.  Audrey was a bright woman, and she engaged in the intellectual pursuit of theology with some interest.  Because she already had an undergraduate degree, she only had to attend the program for one year.

Sadly, Audrey was also subject to depression, and while in Toronto, she experienced some difficulty.  The Committee on the Deaconess Order and Women Workers made her a Deaconess Candidate, but noted some reservations in their minutes.  It was customary at the time though for women to serve for a year or two as a Candidate prior to being designated, so like her classmates, Audrey was allowed to take an appointment with the Board of Home Mission with a probationary kind of status.

Robertson House, an outreach in Winnipeg’s north end was the site of her first appointment, where she served for one year.  Zaidee Stoddard, a Deaconess who served her whole career at the mission became a good friend to Audrey and they retained a connection up until Zaidee died in Halifax in 2001 at the age of 102.  Audrey said that after one year her position at Robertson House was eliminated so she moved further west, accepting the offer of employment made to her by the minister at St. Andrew’s United Church in Moose Jaw.  Again, it was not unusual for the minister to hire, supervise and fire the women workers, even those who were Deaconesses.  But when Audrey arrived she discovered the job description was really that of a church secretary, not as a church worker as she had been led to believe.  This too was not an unprecedented discovery!  Other Deaconesses of the period recount similar frustration that their skills were not recognized in the work that they were hired to do.  There were virtually no standards governing the employment of Women Workers and Deaconesses, and those in place, such as minimum salary, were inadequate. This contributed to the exploitation of many women.  Interestingly, revisions to the Manual on the Deaconess Order in 1960 retain the clause requiring that the women get one full day a week off.  One has to assume the rule was still required because the women needed the protection from the 24/7 job description.

Audrey was unhappy in Moose Jaw, longing for more intellectual challenge and a chance to use her educational skills.  At the same time her father was ill, and as the only child, she felt she needed to move closer to home so she returned to Truro.  There were no openings in the church nearby so she resumed work as a teacher. In recounting this story long after her retirement, Audrey said that it was just as well she returned to teaching, as the pay, and the working conditions, were substantially better.  Teaching gave her the ability and the means to travel widely, in Canada and abroad, including Australia, Bangkok, Singapore, Malaysia, Tokyo and the Philippines.

In 1956 Audrey expressed interest in an opening at Brunswick Street Mission in Halifax and she wrote to Mrs. Campion, the Executive Secretary of the Deaconess Order to inquire if she could be designated as a Deaconess.  After several months of consideration by the Committee on the Deaconess Order, including a request for a medical report, Audrey’s application was rejected, citing “medical concerns”.  While not spelled out in the minutes, the concern was likely related to her mental health.  Audrey did not pursue the position any further, although she could have applied without status as a Deaconess.  In 2003, however, Audrey said very clearly that she was a Deaconess.  It would seem like the dream of exercising a church vocation never left Audrey’s imagination and heart.

Audrey taught in several schools, in Middle Musquodoboit, Brookfield and Truro until her retirement in 1981 at age 55.  Her involvement in the community included membership for over 50 years in the Canadian Federation of University Women.  She was a member of the Colchester East Hants Rotary Club, she enjoyed swimming at the YMCA and her church,  First United in Truro, was important to her.  For years she sang in the choir.

Audrey died in hospital in Truro on October, 2, 2011.  She was the last member of her family.  Her friends gathered to celebrate her life.

This memorial was prepared by Caryn Douglas, February 2013, drawing on Audrey’s obituary, the Minutes of the Committee on the Deaconess Order and Women Workers and an interview with Audrey in her home in 2003.