Jean Macdonald
Back to Index 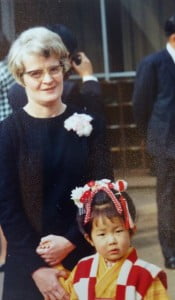 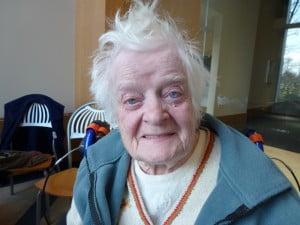 Jean Macdonald was a spirited woman.  She loved life.  She had a passion for learning.  She worked hard, led with enthusiasm and bore a positive attitude.  Her faith was deep and abiding.  She served God in everything she did, and notably in 30 years of dedicated witness to the people of Japan.

This passage, written by Jean as she was leaving Japan in 1980, was shared at her funeral:

I have received so much and have been able to do so little. Perhaps just being a living example of how God gives so much to those who have nothing to give in return may help others to accept God’s love and in faith, be able to go where He leads. I can assure you that He will never leave you nor forsake you, and He will always provide in abundance all that is needful in his sight.

Jean was born Margaret Jean, twin to brother Allister, on April 5, 1917 in Bredenbury, SK, the middle of 6 children. She was such a tiny baby that the doctor told her parents that they should put her aside, because it was unlikely that she would be there by morning. She proved him wrong!

A visiting missionary from China planted a seed in Jean’s 9 year old mind, but in the dry dust bowl of the 1930s the seed couldn’t germinate. Instead Jean worked to provide for her family.  Beginning 1934 she was a bookkeeper for the Rural Municipal Office in Cactus Lake, SK. In 1939 she moved to Ottawa and worked as an auditor for the Canadian Government.  Jean was a go getter, cautioned by her colleagues to slow down!  She accomplished her work so quickly, she made them look bad.

Jean’s twin brother, who had enlisted as a soldier during the war, contracted TB, and died in a sanatorium in Hamilton. His death affected her deeply.  She wanted to do more with her life and that childhood seed began to sprout.  By the spring of 1947, she had earned her BA from University of Toronto. That fall she enrolled in the program at the United Church Training School.  Because she had an undergraduate degree it was a one year program.  Classes at Emmanuel College complemented those given directly by UCTS.  After her graduation she spent one year with the Bank of Canada in Ottawa to earn enough money for further study.

In 1950 she received her MA in Christian Education from Union and Columbia Universities in New York. This prepared her to begin her missionary work, a goal which was not without detractors. Her father wasn’t a fan of Jean’s intention to become a missionary – he couldn’t understand why you would give up a good government job. But give it up she did.

Jean’s original goal had been to go to China like the missionary she had seen in her youth but, as she said, “the Communists got there before me”. So she was commissioned in Montreal by the Woman’s Missionary Society for service in Japan.  Beginning with the Methodists, the WMS had been supporting mission work in Japan since the 1860s.  All of the Canadian personnel had been forced to leave during the war and the WMS was eager to reestablish a Canadian presence in this post war period when Japan was in cultural and economic turmoil. To prepare for her work Jean went to the Graduate School of Far Eastern Studies at Yale, New Haven for the year 1950-51 to learn Japanese.

Docking in Yokohama on August 3, 1951, Jean continued in her language development and began her work as an evangelistic missionary in Nagano Province.  On her first furlough in 1955-56, she completed her second year of theological studies at New College, University of Edinburgh.  She would return to Scotland many times, tracing her roots in a country she loved.

As so often happens in missionary life, after a year’s absence Jean found herself assigned to a very different type of work as the English Secretary for the World Council of Christian Education Convention. With Jean’s background in Christian Education, her proven ability to learn and the attention to detail honed in bookkeeping she was a natural for the position. The World Convention on Christian Education was to be held in Tokyo in 1958 and she was asked to work with the preparation committee and be the liaison officer between the committee and overseas delegates. Traveling throughout Japan from north to south, visiting churches, schools, government offices, large corporations and small businesses, was all part of her work seeking understanding and support – both physical and financial.  It was a huge, complicated and all consuming responsibility.  Jean did it well.  Click here to see her report.

After the Convention Jean settled into 9 years of evangelistic work in Suwa City and the southern end of Nagano Province. Toward the end of that term in 1967 she came down with hepatitis and was ill for some months, continuing convalescence on her furlough. Following the furlough, in 1968 she went to Machida City in the suburbs of Tokyo, again as an evangelistic missionary. Here, she taught English and held Bible classes for children, mothers, university students and student nurses. In 1973, she became Assistant to the Japan Treasurer of the Japan North American Commission on Cooperative Mission (JNAC) while continuing to teach English and Bible Classes.

Of her time in Japan, Jean noted that she saw a lot of changes as the country emerged from the devastating post war period.  These comments from her report home in 1960 provide an insight into life in Japan:

While in Canada [because of my mother’s illness] the superficiality of much of life and the terrific emphasis on materialism shocked me.  Young people in high school with so much freedom and money, but without a comparable sense of their responsibility for and to society came as a surprise to me too. … [In the rural Chino Church] all the older church members have known persecution [during the war], and out of this has come a sense of Christian fellowship and a depth of faith which I have never seen elsewhere.

Just being present among the people of Japan was an important purpose of Jean’s missionary work. In 1980 she wrote, “It has been an opportunity for the children [in my church school classes] to get to know a foreigner and not feel they are that much different from themselves”.

Jean knew that winding up over 30 years of Japanese living was going to take work. She hoped that her Japanese friends would come and visit. She returned to Canada in 1981, and retired in 1982, but the adjustment to feeling at home back took many more years. When asked why a prairie girl settled in Vancouver, Jean was quick to respond, “For the climate, and because it was closest to Japan!”

Shortly after settling down in Vancouver, Jean met Judy Langdon initially through the Association of Professional Church Workers and later as they were volunteers together at the World Council of Churches Assembly. Judy, a social worker, was also a church worker.  When Judy took an interest in purchasing a condominium overlooking English Bay, Jean agreed to join her in the venture.  They shared a home until Jean’s death.

Retirement didn’t mean stopping for Jean – she was always busy, and always seemed to have a list of things to do roughly the length of her arm. Her work as Corresponding Secretary and President with the Vancouver School of Theology Women’s Auxiliary drew on her computer and creative skills.  She created beautiful cards, wrote thoughtful messages and sent out hundreds of them.  She was definitely an Apple groupie and attended several Macworld Expos.

Jean found a church home at Dunbar Heights, where she was active on the Session and Visitation Committees. She had an attitude of “I can do that!” and took on many interesting tasks. In 1983, when the World Council of Churches met at UBC, Jean couldn’t stop herself from becoming involved. In support of this massive event, she took on a big role with the registration team enjoying her immersion in the thick of things.

Jean loved to travel, including genealogical treks to England and Scotland.  She particularly enjoyed these trips. She participated in Methodist Conferences at Swanwick, but she loved driving through Scotland best and so began her search to trace her family roots. It was never ending, often without much progress, given the surname of ‘Macdonald’ in Scotland! At one stop in Leicester, where her father was born, she was unable to get any information from the census: the comment for her family address was: ‘the family was out’.  Jean also traveled to California, where she and Judy were joined by friends at services at Glide Memorial Church in San Francisco.

Jean loved travelling by car.  It was on a car trip with Judy in 2007 that she suffered a mild stroke.  Follow up from that incident revealed she had dementia as well.  Not being one to focus on herself though, Jean refused to end that car trip. Arthritis and weakness meant that by 2009 she required a wheelchair.  But it didn’t keep her down as she participated in several organized run/walks in her chair.

Family and friends were important to Jean – her birth family, the family she and Judy became, and the many long-standing friendships she developed both in Canada and Japan. In 2000, she received as a gift a booklet, “A woman from the land of the maple leaf”, made by her Japanese friends, Mrs. Naoko Hanaoka, Mrs. Nakanori, and Mrs. Sato. In the front leaf of the booklet, Jean noted that “I am now living in Canada, but my heart will always be in Japan”.   Jean died July 4, 2012 and was remembered with great regard and fondness in a memorial service August 21, 2012.

This biography written by Caryn Douglas, February 2013, draws heavily from the eulogy delivered by Edith Kirkpatrick at Jean’s funeral, with additional information from email correspondence with Judy Langdon and from Missionaries at Work and Missionaries Reporting, publications of the Woman’s Missionary Society.