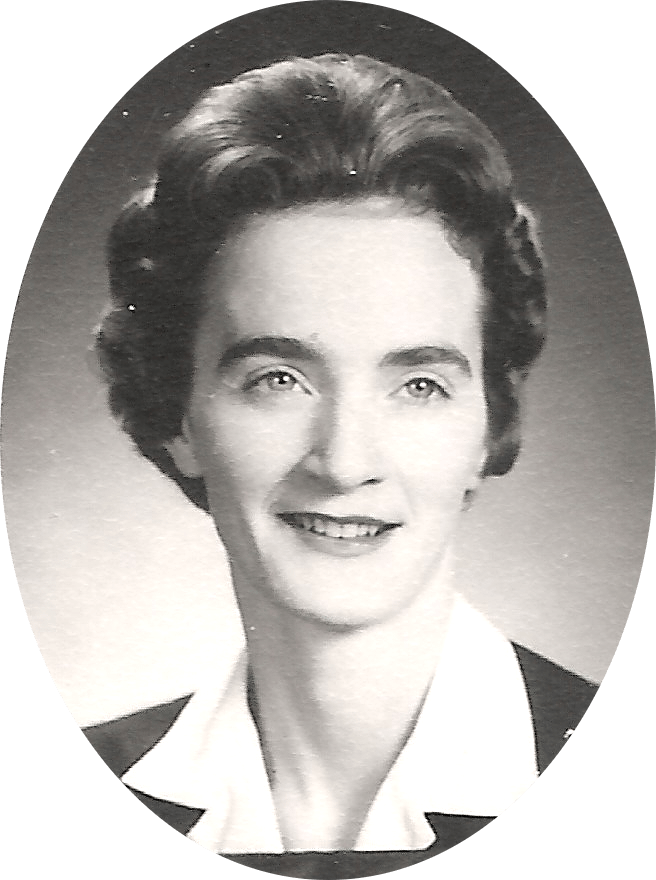 Eleanor Ethel Ferguson
Back to Index 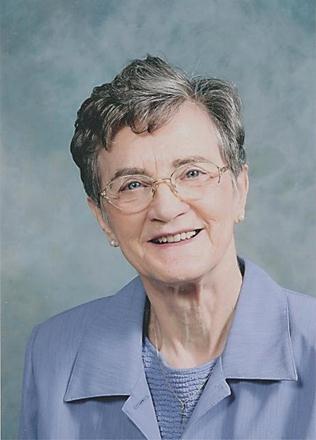 “Eleanor Ferguson was a woman of iron will who had a very kind and compassionate way about her, all at the same time,” writes Joel Den Haan, a former minister.

“She became a really good friend to my son Eric who was still a preschooler when we moved to Innisfail.  Eleanor often visited with Eric, had him over for his own special lunches after church on Sundays.  … Eleanor’s love of children really shone out!

But at the same time, when it came to refugee sponsorship issues or other official communications on behalf of the Board at Innisfail United Church, the iron-willed element of Eleanor’s character showed clearly.   She could write a diplomatically-worded letter when a problem arose, which took on no personal vindictiveness in its tone. But nevertheless the individual receiving such a communication … knew they needed to mend their ways!  Firm diplomacy that would have made headway at the United Nations!”

Perhaps Eleanor learned to walk the balance between gentle and fierce as the seventh of nine children.  Born in Tofield, Alberta, April 19, 1932, she grew up alongside Griffin Creek on a small farm near the town of Brownvale in the Peace River area of northern Alberta.

Life for children in those depression era days meant much more independence and self-reliance than the norm today.  From a young age Eleanor had her tasks to do in a house without central heating, electricity or running water. That background contributed to Eleanor’s tenacity in the face of life long chronic illness.  Her neice, Kathleen Duncan, recounts this story to illustrate Eleanor’s formation into courage:

The nine Ferguson children traveled several miles to school each day; on good days getting a ride in a horse drawn wagon.  Trips to town might be made on horseback.  But many times they only mode of transportation was by foot. One particular day, Eleanor and two of her siblings were in town. Facing the long walk home without relish, Eleanor’s sister Margaret got the idea to ask the freight train engineer, who was about to pull out of town, to give them a lift to their farm.  To their surprise he said sure. They jumped on board and when they came to the farm the train slowed down sufficiently that the kids could hop off.

After high school in 1950, Eleanor worked for a local printer just long enough to save enough money to explore the things that interested her, particularly spirituality and religion. In 1952, at the age of 20 she joined St. Paul’s United Church in Peace River, and attended the 4 month Christian Leadership Training School at Naramata Centre in British Columbia. Eleanor felt the twinges of a call to ministry but she knew it wasn’t to pulpit ministry.  She knew she wanted to work with people so settled on a plan to obtain an educational background in psychology. Transferring her membership to Knox in Edmonton she entered the Bachelor’s program at the University of Alberta. Working to support herself and studying part time, she graduated in 1957. In the summer of 1956 she had a Summer Mission Field with the congregations at Liberal and Erskine, Alberta.  After graduation she spent the summer as a Church Extension Worker for Edmonton Presbytery in the heyday of expansion with churches popping up throughout the newly formed suburbs and Sunday schools with 1,000s of children.  Church work appealed to Eleanor, so in September of 1957, she was excited to be appointed by the Woman’s Missionary Society as a Mission Worker at All People’s Mission, also in Edmonton.  It was hard work, but Eleanor rose to the challenge even with her physical condition.

From the time that Eleanor was sixteen she struggled with the health of her lungs and breathing was hard as a result of a condition called Bronciectasis. She was determined to keep up with others, however, and she was always very strong, very determined, very independent.  It helped that she had a good sense of humour.

Eleanor followed her WMS appointment with two years as a social worker, the second in Toronto.  In 1961 she enrolled in the two year program at the United Church Training School, renamed Covenant College by the time of her graduation with a Diploma in 1963. Her summer field position, between first and second year, was in Yorkton, Saskatchewan, where she shadowed the Missionary at Large. The program of study, for those already possessing an undergraduate degree included classes at Emmanuel College.  In 1964, after completing her final Emmanuel courses she received a Bachelor of Religious Education, which was later renamed a Master of Religious Education.

As a candidate from Runnymede United Church in Toronto, Eleanor was commissioned as a Deaconess by Toronto Conference in June, 1963.  Her first appointment was to the Chinese Mission in Saskatoon, where she stayed for a year.  Eleanor wanted to be closer to her family, but there were no openings suitable for a Deaconess in Edmonton, so she took a position with the Children’s Aid Society in the fall of 1964.

This was a time of transition for the Deaconess Order in the United Church. Deaconesses were lay women, they were not part of the order of ministry. In fact, a phrase often used to describe their role in the church was, “any work of the church, except ministry.”  Deaconesses, in most cases up until this period, were hired by the ordained minister in a congregation, and supervised by him.  Eleanor applied to a congregation after moving to Edmonton, but the minister wouldn’t hire her, citing her health, telling her ministry was only for the healthy.

Eleanor left church work, at least professionally, landing a position as a Special Education Teacher in Edmonton and returning to university where she obtained a Graduate Diploma in Guidance in 1968.  She worked for the Edmonton Public School Board from 1966 to 1974.

Set in a context of the rising of the 2nd wave of modern feminism the sexism and clericalism that underpinned the way Deaconesses were treated was being examined.  In 1964, Deaconesses were granted membership in Presbyteries, and accountability for them moved from the National Committee on the Deaconess Order and Women Workers to the local Presbytery where they held membership.  Some of the old patterns were beginning to fall away.  In 1960 the rule requiring women to be disjoined from the Order when they married was removed.  Officially, the rule that Deaconesses would be disjoined when they weren’t working for the church, a rule built on assumptions that women’s vocation to church work was temporary, was still in place. But in some presbyteries the rule was not being enforced. Edmonton Presbytery was one of those, so Eleanor was not removed from the roll of Presbytery and did not have her status revoked. In 1982, Eleanor became a Diaconal Minister, a new name for Deaconesses and Certified Churchmen, now in an Order recognized fully as ministry.

In 1974, Eleanor married Clarence Ferguson, an ordained United Church minister.  They shared an interest in ideas and a common approach to theology and ministry.  They loved to travel. It was very convenient that he had the same last name! A widower, he had two grown daughters, who welcomed her into the family. Clarence took a call in Ontario, where he was originally from and for the next years Eleanor was a school guidance counselor. In 1981, when Clarence took a call to a part time ministry in Innisfail, Alberta, Eleanor became an unofficial member of the team, contributing in a volunteer capacity, as her health allowed.

Diaconal Minister Lori Crocker, part of the ministry team at Innisfail beginning in 1986 recalls, “how supportive she was to me as a young minister when I lived and served [at Innisfail. Eleanor] persevered with chronic health challenges and through it all showed tremendous determination and commitment. She was devoted to her family, her faith and her community. Whenever Eleanor took on a project or cause she was like a dog with a bone, giving herself 110% to the cause. Her persistence could sometimes be exhausting but she always brought out the best in you.”

Eleanor enjoyed gardening, hospitality and people. She always had a toy box in her place, just in case a child came to visit.  She is remembered by many people now as an “auntie” willing to spend time with children, playing games and taking a sincere interest in what children thought and did.

Clarence died in 1993, a loss Eleanor felt deeply. She remained active in the Innisfail church and community.  She was an advocate on several social concerns.  She worked hard for example on a campaign to ban smoking in public places, which Innisfail passed into law in 1995, making it one of the first towns in Alberta to have such progressive legislation. (Recent picture of Eleanor)

Motivated by her health, Eleanor moved to the milder climate of Victoria in 2002, where she could also be closer to her sister Margaret. She continued her church involvement at Metropolitan United Church, where she taught Sunday School and enjoyed the fellowship. As her strength declined she slowed down, but she retained her sharp mind and interest in ideas.  Eleanor died September 13, 2012 of complications from pneumonia in her 80th year.

The eulogy at Eleanor’s funeral concluded this way:

[Eleanor had a banner] hanging from her door so that she would see it each morning as she was getting ready for the day.  It …touches on Eleanor’s philosophy of life. It is a quote from his holiness the Dalai Lama:

Every day, think as you wake up.