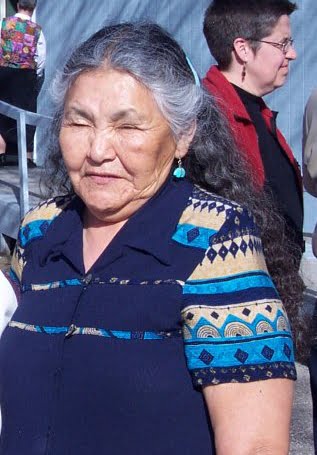 Maria (Shepherd) Joyea
Back to Index

Maria Joyea, Miyocasatawiskwew, Good Claw Woman, born March 30, 1935, was a respected elder of the Whitebear First Nation in Saskatchewan and she served First Nations people throughout the Canadian prairies and across the border in Montana and North Dakota. At the time of her death she was one of the Leading Elders for the All Native Circle Conference. She also had 27 grandchildren and 25 great-grandchildren. God and her family were loves in her life.

Maria completed the requirements for her Diploma in Native Ministry Training from the Dr. Jessie Saultaux Resource Centre in Beausejour in 2001. She stood out among her classmates because of her capacity to befriend and counsel people. She was commissioned as a Diaconal Minister by ANCC at the Grand Council in Fisher River, Manitoba, May 27th, 2001.

Her call to ministry, as Maria described it, “was gradual but persistent.” She was raised in the United Church and along with her siblings walked 2 miles to church on Sundays. While her parents did not attend the church, they did support it in many ways and did not prevent them from attending.

Commissioning may have marked her official entry into ministry, but she began serving her community of White Bear years before. As Maria became a young adult, she left the reserve and lived in Regina but life there as a single parent was very difficult. Moving back to the community she served along-side Rev. Dan Manning for several years in the 70’s, employed with funding provided by “Manpower”. ANCC Speaker Cheryl Jourdain commented, “they somehow convinced Manpower of the need in the community for the church work. … Maria was such an independent spirit. Nothing could keep her from doing the things she absolutely loved.” Her work was primarily with the children’s programming; she gave leadership to Sunday School and other gatherings of the children. She would call in the Elders so that the children could also learn some stories from their own tradition. Jake Naganosh, an Aboriginal minister from Ontario who also served at Whitebear, was another mentor, and Maria worked as a volunteer with him for many years. She served the church in this capacity for over a decade before beginning her studies towards ministry.

Maria’s learning journey began with trips to Cooks School (for Native Ministry) in Arizona, along with other students from Saskatchewan and Manitoba. Friends of Maria’s, women like Jessie Saulteaux, saw that a key to building strong, independent churches and communities was indigenous leadership. Maria shared in that vision.

Maria was never interested in preaching and did not preach. Instead her ministry was one of service. She always had time for people, even those down and out. She understood diaconal ministry to be an ongoing mixture of education, pastoral care and service, always with an eye to determine and meet the needs of her community. After commissioning Maria served Regina Outreach Ministry, as well as White Bear United Church.

Carrying two bundles was also a vision Maria lived in her ministry. She carried the teachings of her aboriginal spirituality and she carried the Bible and its Christian teachings. She showed the true meaning of grace and peace, and modeled the 7 sacred teachings.

In retirement she attended Knox-Metropolitan United Church in Regina and worked in the area of pastoral care; doing home visits as well as hospital visitation.

Another gift of retirement for Maria was more time for dancing. She firmly believed that dancing could bring healing. She led Round Dances during which she offered the healing of prayers encouraged by the Spirit. And, she found her way to many pow wows, something she had done all her adult life. Cheryl Jourdain recalls, “I was so privileged for her to show me her regalia – the outfits she brought to wear while she danced at this pow wow [she spontaneously invited me to attend with her in New Mexico].” Many people had stories of Maria and her love of the pow wow trail.

Maria’s term as Leading Elder of ANCC spanned 2009-2012 and she shared this eldership with Murdo McDougall of Garden Hill, Manitoba. She enjoyed every part of the responsibilities: even keeping track of Murdo…or keeping Murdo on track – something she did well with her good sense of humour and wit. She also appreciated the many opportunities to travel and visit with people in the communities. On a visit to Pikangikum, a remote community with one of the highest rates of youth suicide, her companion, United Church General Secretary, Nora Sanders expressed deep gratitude for Maria’s pastoral grace and leadership.

In the role of Past Leading Elder, Maria imagined she would wind down for the activity of church and find more time for her family and friends. But illness over took her and with her children at her bedside she passed away on February 4, 2013 at the age of 77. She told her family she was not afraid, “I believe in Jesus. I trust him.”