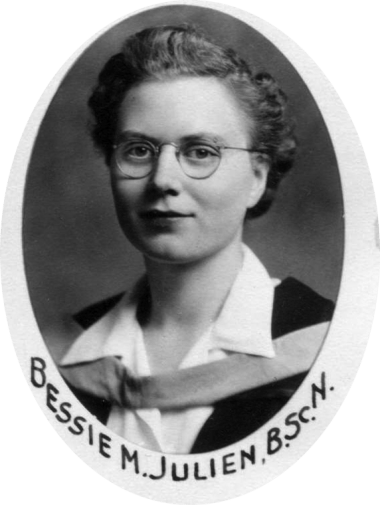 Bessie Julien Dayfoot
Back to Index 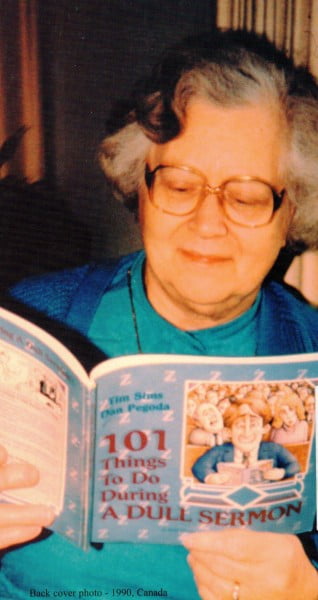 This photo from 1990 from the back jacket of her memoir, “Would I do it over again …” is a clear indication of her sense of humour.

Bessie Julien was born in Wheatley, in southwestern Ontario in 1918, the second of 4 children, into an active Methodist family. Her mother was in the Woman’s Missionary Society (WMS) and hosted visiting missionaries upon occasion. That is where Bessie first got the idea that she could serve God overseas. The usual activities for a church girl filled her days; CGIT, camp, choir, Sunday school and worship. Because her father worked on the railway, and had passes, summers were also spent traveling. Music was another large presence in their household. Bessie, despite a serious accident requiring surgery to repair severed tendons in her arm, played the cello, and eventually the piano.

The hospital stay with her arm influenced her decision that she would be a missionary nurse. Her parents were not that supportive, until they discovered she could take nursing at university. That was the kind of education they had in mind for their daughter. Bessie graduated from the 5 year program at the University of Western Ontario and Victoria Hospital in London with a BScN in 1938. She worked in Toronto for the Victorian Order of Nurses in York Township. During her second year with VON she began the application to be a missionary, which required one year of study at the United Church Training School. Rules then required her to enter the school before she was 26, so in the fall of 1943 she put away her nursing uniform and became a student. In Bessie’s words, “I enjoyed my year there.” During that year she took piano lessons and practiced on the school piano. She graduated in the spring (photo left) and returned to work with VON during the day and took shifts at Women’s College hospital in the evening to earn extra money. Before going overseas she had one more goal to accomplish. In September 1945 she stopped working full time and practiced the piano, earning her ATCM in January, 1946. The WMS officially made her a missionary in 1945, allowing her to complete her music program before she went to West China as a medical missionary.

Within weeks of arriving in Chengtu, in 1946, Bessie met Art Dayfoot, an ordained United Church minister who had been in China about a year. Engaged a few months later, they were married in 1947. Bessie was officially still appointed as a missionary, although now with the Foreign Mission Committee of the United Church, and she continued to do public health nursing, running baby clinics for example, and helping in the hospital, as well as raising their daughter Cathy, born in 1948. But China was changing rapidly and as the communists took over the area of China in which they lived, Bessie could no longer work. The signs of war were everywhere and many United Church missionaries were leaving as conditions had become unsafe. Bessie writes, “Between the time when the Communists took over our area and we left for Canada, the soldiers were swarming all over our Mission Compound. Some were billeted in the hospital and some lived in our house. … It was a stressful time. The soldiers drilled and marched daily in our yard, singing their propaganda songs. Cathy, at the ripe old age of almost two, had learned them all and sang them all the way home to Canada – but with one little addition of her own: a big long Presbyterian “A-men” at the end.” Bessie recounts the humour but also the tension. Her intervention with the soldiers to save the director of the hospital from being taken to jail resulted in her being put on trial. Another Chinese doctor intervened for her and she was set free, but she wondered the rest of her life if he suffered consequences as a result.

In 1950, the work made impossible by the conditions, they returned to Canada. A year of study for Art followed in England, and then a decision to be appointed as missionaries in Trinidad.

The Dayfoots served with the Presbyterian Church in Trinidad and Grenada from 1952 to 1974. For ten of those years, Art was the Principal of St. Andrew’s Theological College in San Fernando. Cathy was joined by a brother Charles a few months after arriving back in Canada from China. Three other children, Howard, Nancy and Tim were born in Trinidad. In addition to the demands of being a mother, Bessie’s work was primarily in support of groups in the local congregations, particularly women’s work, and for the years at the College she was involved on campus where she taught Health Sciences. Everywhere they were, she taught music as well. She described herself as a “jack of all trades and master of none”. Over the twenty years they watched the church grow its own leaders and assume independence. The time for foreign missionaries was coming to an end; the local people had the abilities needed.

A colleague in Trinidad, Brinslee Samaroo, wrote these words about Bessie: How well do I remember her ministering to the rural women through the teaching of skills, solving family disputes and offering sound counsel to folks who had no opportunity to access the formal processes of government. Her sincerity was so apparent that she soon gained the trust of those among whom she worked. She shared their simple meals with gusto or slept in their cottages when nightfall overtook her. In her quiet and unobtrusive way, she complemented the dynamic outreach of her husband Art. Such missionaries gave Canada a good name.

Returning to Canada, Bessie resumed nursing, working at Sunnybrook Hospital for nearly a decade until retiring in 1983. Art served a couple of pastoral charges in Toronto before his retirement. They lived in Brampton and then as they got older in Toronto.

Bessie had many gifts. She had a practical wisdom. She had a faith that included a deeply personal relationship with God and Jesus. She was adaptive and rolled through a lot of difficult times: the tensions in China, life without all the modern conveniences, the heartbreak of having their son Howard in North American hospitals for years at a time, losing her daughter Cathy to cancer in 2008.

She had gifts for healing, not the least of which was humour, one of the best medicines. Her gift of music was healing too, for her and for others.

This biography was written by Caryn Douglas in 2015 drawing on several sources including a Sermon preached by Martha ter Kuile at Bloor St. United Church at Bessie’s funeral, Bessie’s autobiography, Would I Do it Over Again …, and personal correspondence and visits with her and with her daughter Cathy Muller (a graduate of The Centre for Christian Studies in 1971) between 2001 – 2008.