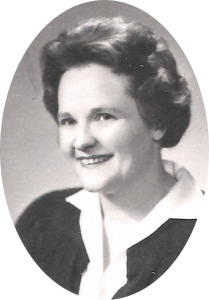 Evelyn Beveridge
Back to Index 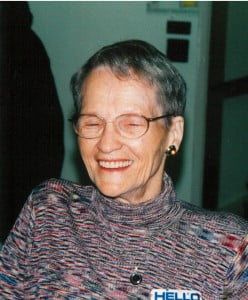 Evelyn Celestia Denton was born to Isabel and James Denton, at their home, a small apartment on Whyte Avenue in Edmonton, November 13, 1920. She was the first of 10 children. In 1924, her parents, then with 3 children, bought a farm in Duffield, Alberta. They were a happy family in what Evelyn described as their log cabin home for 2 adults and eventually all those kids: rooms divided by curtains, 2 sleeping in a bed, making due with love to fill in where creature comforts lacked. In 1940 her dad finished their real home, but it was events a decade earlier that reshaped Evelyn’s journey. In September 1930, she contracted polio.

Evelyn saw her 10th, 11th and 12th birthdays in an Edmonton hospital. In Evelyn’s words, “During all that time I did not see the family [siblings] as they lived in the country and had no way to travel to Edmonton. [When] I returned home. I was only able to walk short distances, and my family was concerned if I would be able to attend school. At the beginning … my parents decided to transport me to school using a team of horse and sleigh …. but alas, when spring came … my father desperately needed the horse to prepare the land and seed a crop. Suddenly, my mother remembered having a lovely girl’s saddle which she had inherited … Each school day, one of my brothers or sisters went to the pasture in early morning to bring in a horse, saddle it, then help me mount it. … I was just thrilled to go to school – on that one mile dirt road. … Whenever Father needed the horse during spring seeding and fall harvest, one sibling would take the horse halfway home and Mom or Dad would meet them to take the horse the rest of the way. Consequently, Dad was never able to go to the field until nearly 10 o’clock in the morning … since my father never got on the land until mid-morning, he worked until late in the evening . … Over time, folks who knew our circumstances offered the use of a gentle pony for me to ride. Even the Raleigh man, who had a route in the district, loaned us a pony for a while. Someone even provided a two wheel cart for me to ride in – rather bumpy! Another time, a donkey was put into service.”

Evelyn left school, strong enough to take employment to help support the family. Later through a special government program for polio survivors she got educational upgrading. For nearly 20 years she worked in Edmonton for the Alberta government, until she decided to take action on a call that had been growing in her heart. Evelyn had become very involved in the Sunday School movement, teaching in her home congregation, and providing leadership in the Edmonton and District Sunday School Association. She enrolled in some courses at U of Alberta, and in the fall of 1962 she moved to Toronto to attend Covenant College, graduating from a special program in 1964. One of her classmates, Mary Ellen Moore, recalls the quality that Evelyn brought to the worship time that she led: “She had a soothing, calming way of speaking that was welcomed by us as busy students. Evelyn was older than most of us, but she wanted us to just treat her like everyone else, and she fit in naturally. Later, when I moved to Edmonton, I saw her sometimes. What I remember about her then, like at school, is she always had a warm big smile. Always.”

Evelyn decided to remain in Toronto and took an appointment at Fred Victor Mission, in inner city Toronto, where she served for 10 years. Evelyn must have passed through the Mission door just as Wesley A. Hunnisett was leaving. Hunnisett began at Fred Victor in 1918 and for 46 years he was the director, dubbed the “Pastor for the Poor”. As he retired, tensions were high between himself and the board because of his refusal to move from a charity model to one incorporating more social justice. For the first few years that Evelyn was there, working alongside Deaconess Helen Mack, and an interim director, the Mission was adrift. The women staffed a recreational program for lonely seniors, assisted with Sunday services, organized the Sunday school and mid week activities, ran summer programming for children and programs for women, as well as participating in the clothing dispensary and soup kitchen for men. The Mission was in bad shape though. Change needed to happen, but leadership was lacking. There was public and church critique, along with recognition that a rapid growth of homeless men in the neighbourhood was overwhelming the mission’s capacity. In 1968, Keith Whitney, trained in the Canadian Urban Training Project (CUT), a program that was also influencing Covenant College, was hired on staff, and 2 years later became the director. Significant and what many viewed as positive change happened quickly, among which was focusing the mission on men only. Fewer families lived in the area than in previous decades; the programs were not well attended. Another was to close the small congregation and it’s Sunday school. By 1972 the focus of Evelyn’s work would have been completely altered.

While all this was happening in her professional life, Evelyn had two major surgeries on her hip. Her mobility was beginning to be affected by what is now recognized as post-polio syndrome. Motivated by her health, and likely by the changing conditions at the Mission, she decided to return to Edmonton to be closer to family.

The reality of church architecture in the mid 1970s, put an end to Evelyn’s hopes of continuing in church work, work that she loved and she felt called to. Very few of Edmonton’s churches, and particularly the ones hiring Christian education staff, were accessible. Evelyn interviewed for one church position, and the congregation wanted to have her minister among them, but the accommodation to her mobility was not possible. In the meantime, she had returned to work with the Alberta government, where there was an elevator. She retired from the government in 1983 and filled her days with meaning and activity. She continued to travel, a pastime she loved, visiting her many siblings and nieces and nephews. She was an active member at Robertson Wesley, particularly with the UCW.

Evelyn was a keen supporter of the Centre for Christian Studies. She valued how the school had supported her as an older student, without a lot of academic background. When she was less able to get around, relying on a wheelchair much of the time, she took on a role as a card writer for the school, penning hundreds of thank you notes to donors. Whenever she attended a diaconal or CCS gathering, she always had that bright smile, her eyes flashing with enthusiasm for the people she met.

Evelyn died August 19, 2013. At her funeral, her neice expressed these words, “Aunty Evelyn accomplished so much in her life on earth. She taught every one of us the importance of loving our family members, getting a good education and working hard. She was an example of enduring trials and that developing an abiding faith in Jesus Christ, our Redeemer, was important.

This biography was written by Caryn Douglas, drawing on a eulogy by Carole A. Hudson and articles from The Ryerson Newsletter and The Fred Victor Mission Story, by Cary Fagan.