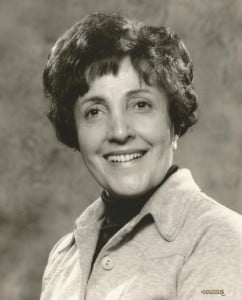 Anne Liota
Back to Index 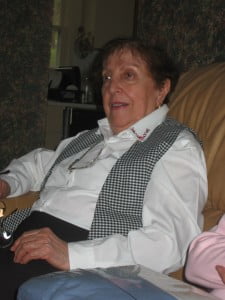 Redeemer. It’s a precious name to us all, but especially to Anne Liota. Anne was the fourth of five children born to Italian parents living in the North End of Hamilton back in the 1920s. There was a United Church there – Redeemer. It had a mission to the neighbourhood – to be a community where immigrant families would find the support they needed “to integrate into Canadian life and citizenship.”

When Anne’s family moved into a house near the church the minister stopped to welcome the new family. Anne’s father liked this man and decided that the new country would be a new start in faith for him and his children too. So they began to worship and live their Christian lives in the Redeemer community.

Worship services were conducted in both Italian and English and a great community life was enjoyed. In the 1940s as Japanese-Canadians were evacuated from the West Coast, some found their way to Hamilton and began worshipping at Redeemer. Anne recalls that the menu at church dinners was expanded beyond the usual spaghetti and meatballs to udon noodles! Everyone got along well in this church of all nations. She still has a photo from a calendar of the day that shows Japanese and Italian and Africans all together in the young peoples’ group. Such was the international and interracial life of Redeemer.

Completing school Anne went to work in the Bank of Montreal and because single Italian girls by custom could not live on their own, she lived with her sister and her family, becoming a “second mother” to her nephew and neices.

One day the minister of Redeemer spoke to Anne about a possible call she might have to ministry. She was busy teaching in the Sunday School, Secretary of the Official Board and active in all aspects of church life. Two of her cousins were nuns, one a cloistered nun. The minister gave Anne the telephone number of a woman in Toronto and the result was that she quit her fourteen year career in the bank and entered Covenant College in 1965, which offered ministry preparation programs for lay workers.

Working for the Home Mission Board of the General Council, her first appointment was with the Italian United Church in Toronto where the minister she knew so well from Hamilton was then the minister. She helped to train and support Sunday School teachers, worked with the Young People’s Union and did a lot of pastoral visiting, especially hospital visiting.

From there, in 1968, she accepted an appointment in Thompson, Manitoba to work with the United Church in that new mining town. The work was similar to what she had done in Toronto, but the environment was entirely different, the town demographic being so very young, not to mention northern!

Moving further north in 1972, Anne took an appointment in Norway House, Manitoba. This was an isolated Cree reserve north of Lake Winnipeg. The United Church had a church building and also a recreation or community centre. Anne lived in the small apartment on the top floor of that centre. The apartment was not ideal but the view of the river was wonderful! She laughs, “God always provides some blessing.” It was part of Anne’s job to keep the wood furnaces for the church and the recreation centre going – even splitting wood some of the time.

In Norway House, Anne worked with the Rev. Stan MacKay who later became the Rt. Rev. Stan MacKay when he assumed the office of Moderator of the United Church of Canada. Again she worked with the Sunday School and with the UCW. She would go around picking up the women to knit and sew and have some community together. On the last Sunday of every month, when money was running a bit low, the church would put on a community dinner. (“The church,” Anne laughs, “of course you know who ‘the church’ was!”) Everyone was welcome. Anne recalls that about eighty or so would arrive. They only had seats for fifty so one of the community women would line everyone up and select who would be in the first or second seating.

Anne was aware of the effects on the community of the Residential School system. The residential school in Norway House closed in 1967, converted entirely into a day school to accommodate the large student population of the reserve, many of whom had had to travel as far as Brandon just a few short years before.

After one year at Norway House, it was decided that her position would be ideal for training an Aboriginal candidate for ministry, as the first training program for “Indian Ministry” was started in the Conference that year. Anne’s next appointment was to Fisher River Cree Nation at Koostatak, another reserve just a few hours north of Winnipeg. She recalls on a trip to Winnipeg that one of the women pointed out a farm and said that that used to be their land before they were moved into the flats near the river.

Did she find the work on reserves different from that in the town congregations? Circumstances were different but for Anne coming from the Redeemer experience in Hamilton, people are people everyone just living their lives and wanting to live their Christianity where they were.

Next Anne worked in a congregation in Leamington, Ontario where she was involved in a team ministry, with responsibility for education and pastoral care. She did a lot of hospital visiting. A return to the west, this time Saskatchewan, allowed for a placement in a rural pastoral charge as the sole minister. She had begun taking further courses needed for ordination, but a heart attack brought that study, and her official ministry, to an end.

Anne returned to Hamilton and to life in First-Pilgrim United until her move to seniors housing. Since that time she has worshipped at St. Paul’s, Dundas. It has been a long time since her life began at Redeemer, but her Redeemer helped her live her life all those years and her Redeemer continues to live in her today.

Anne entered a period of decline in her health and died peacefully, December 27, 2013 in her 88th year.

This story of Anne’s life was written by Rick Spies, minister at St. Paul’s United Church, Dundas for the church newsletter. Editing by Caryn Douglas, 2015.