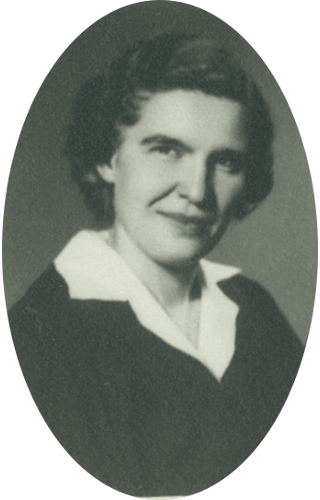 Louise (Cox) Pritchard
Back to Index 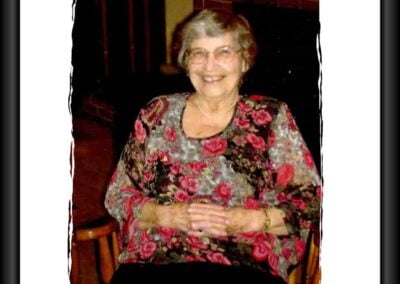 Louise Cox was born in Morell, Prince Edward Island in 1923, into a proud but modest family. She was one of 4 children born to Russell and Katherine, coming after Elizabeth, Dorothy and Robert. Her father died while she was quite young leaving her mother to raise the children on her own in depression era, rural PEI.

As a young child Louise had a strong fascination with the piano, continually poking out tunes by ear by the age of 3. By 5 she was playing with two hands, accompanying the melody. It was apparent there was talent, but not the resources for lessons. However, the generosity of her older sister Dorothy and then later life insurance when her brother was tragically killed in the war made her musical education possible. This theme of generosity continued in Louise’s life, and she many times waived fees so dedicated students could continue to study.

Louise attended McGill University until in her second year she contracted tuberculous. Returning to PEI, she spent a full year in the sanatorium. Having earned a Licentiate in Music from McGill, she decided not to finish the degree, rather, after earning enough money to travel west again she entered the United Church Training School in 1952, with plans to become a Deaconess.

At UCTS she forged life-long friend ships with her classmates as they engaged the formal and informal learning opportunities at the school. Katharine Hockin, on the teaching staff at UCTS, was a huge influence on Louise. Katharine helped the women to open their eyes and see what was really going on in the world, especially about issues of mission and racism. Louise said, “I wouldn’t trade anything for my time at UCTS. The ideas that people think are new now were the things we were learning more than 50 years ago.” (1954 Class Yearbook)

Upon graduation in 1954, she was designated a Deaconess by Maritime Conference and took an appointment at Knox Metropolitan United Church in Edmonton as the Director of Christian Education. Shortly after arriving she met Jack, an ordained minister. They were married in 1956. Because of the rule disallowing married women to be Deaconesses, Louise explained, “I was automatically disqualified from being a Deaconess. But I still have my pin [given at designation], no one asked for my pin.” She had a sense that she shared ministry with her husband; she didn’t play the “pouring tea kind of thing”, she never joined the Women’s Auxiliary or the UCW. She was very active though in the Woman’s Missionary Society. She also did a lot of sunday school work and, of course, lead choirs. “I worked all the time, I just didn’t get paid,” she said.

When Louise and Jack realized that they could not have their own children they decided to adopt and they created a racially diverse family with a black, an aboriginal and a white child. Their motivation for this decision stemmed from their experience advocating for Dorothy, Louise’s older sister, when she wanted to adopt a child she had met while working in India. Canadian policy prohibited single women from adopting children. Louise and Jack worked tirelessly to make it possible for the adoption to proceed and after 3 years of lobbying, they were successful. This story gives a glimpse into the principled view they had of the world and the capacity of their creativity and energy.

Jack led with his principles at other times, and while they were living in Toronto in 1967 his advocacy for women’s rights resulted in his removal from a congregation. Louise expanded her music teaching to sustain the family until Jack returned to his previous work as a teacher. In 1974, they moved to Thunder Bay. Jack as the minister at Westminster United Church, and Louise leading the music, they revitalized the congregation. A highlight for her in Thunder Bay was singing in the 150 voice Symphony Chorus. She found it a deeply satisfying spiritual experience. In 1982 Louise experienced a great blow when Jack died suddenly of a brain hemorrhage.

Louise never considered be reinstated as a Deaconess when that became possible after the rules were ammended, but when Jack died she did contemplate studying theology. With clarity discerned about her truest vocation, she decided to return to PEI and for the next three decades she continued her ministry of music: teaching, leading choirs, expanding her own skills. Altogether, she taught for more than 60 years. Her last piano lesson was just 4 days before she died. She was proud of all her students, and satisfied when some of them advanced in their careers to become professional musicians themselves.

Louise’s son John wrote, “Pedagogy is what it was all about for my mother. She shared as much knowledge as she could with her students and encouraged them to excel…and excel they have.” An award in her honour has been established by the Music Festival in Charlottetown.

Louise had some chronic debilitating health problems. Her daughter Mary pre-deceased her. But she remained a positive and faith filled person. She confided to a friend not long before her death: “I’m not afraid of death…but the act of dying can be a little inconvenient.”

This biography was written by Caryn Douglas in 2015 drawing on a eulogy by her son John Pritchard, a memorial from the Queens County Music Festival, her obituary, Jack Pritchard’s Manitoba and Northwestern Ontario Memorial and notes from an interview in 2009.