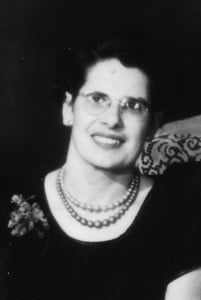 Averil Cropp Banks
Back to Index 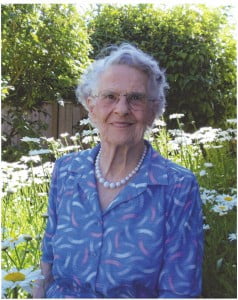 Averil Cropp was born July 18, 1920, at Gerald, Saskatchewan. She had a variety of careers, from hairdresser, to farmer, to World War 2 era factory worker manufacturing radar, to teacher. In 1951, she received her Bachelor of Household Science degree from the University of Saskatchewan.

Averil also had a long history of service to the church. Married to Neil Banks, an ordained United Church minister, she played an unofficial, but active role alongside of him in pastoral charges in British Columbia and Ontario.

From 1964 to 1978, Averil and Neil were appointed as United Church Missionaries in Jamaica and the Cayman Islands, as noted in the Yearbook: Jamaica – “Rev. Neil Banks, and Mrs. Banks.” First names do not appear for any of the married missionary women, nor are they listed under Lay Missionaries, yet they were officially appointed and commissioned by the Church along with their husbands. They both worked, but only one received a pay cheque. In fact, Rhona, their daughter, explained that Averil was offered a position as a teacher with a Jamaican school, but if she had taken it, the church salary (all paid to Neil) would have been reduced. This was an injustice at the time, but its most insidious affect was when the women reached retirement age. They got no pension. Remembering Averil at the 2015 Meeting of Diakonia of the United Church of Canada is a small gesture to correct the actions of the church.

The Banks spent three years working in Kingston, Jamaica with the Presbyterian Church of Jamaica and Grand Cayman, a partner church of the United Church of Canada. After a year of furlough in Toronto, the Church in Jamaica requested they go to George Town, Grand Cayman in 1968. It was on that furlough year that Averil entered a year of studies as a special student at Covenant College, to broaden her skills and deepen her theological understanding for the pastoral and Christian education work she was doing.

Averil was not commissioned as a Deaconess due to her return to the Caribbean but she was proud of her training and carried the ethos.

Neil died in 1994. Averil continued to be active in church leadership until her health slowed her down in her mid 80s. In her latter years, she lived in Richmond, B.C., attending St. Andrew Wesley and Gilmore Park United Churches. In the last years of her life she was in a retirement home but able to live fairly independently until just shortly before her death at the age of 94. Rhona said, “she had a deep faith and she wasn’t afraid of dying”.

Averil loved sharing the gospel, loved Bible study, loved being with people in discussion and learning. She believed that she was called to help others, and she had a strong conviction that being a Christian should be evident in one’s life: she was good at holding people to account for that with her own example.

This biography was written by Caryn Douglas in 2015, drawing on an interview with Rhona Panton, Averil’s daughter, and material from United Church Yearbooks. Photos are courtesy of Rhona.