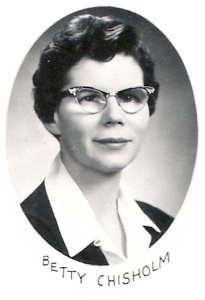 Betty Chisholm Cade
Back to Index 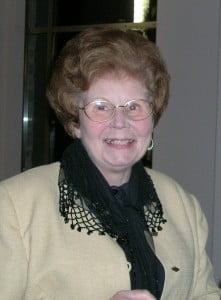 Betty Ann Chisholm Cade was a spirited woman, deeply committed to the ministry of hospitality. Her home was frequently the location of parties for her family and friends. She was faithful in connecting her classmates to one another and other United Church Training School (UCTS) alumni throughout her life. Betty loved a party!

Betty was born on May 14, 1931 and grew up in Niagara Falls, Ontario.  When she decided to pursue her interest in Christian Education and attend the United Church Training School in Toronto she had to complete Grade 13.  She did this by attending the Loretto (Catholic Girls) School.  She always said that the sisters were very kind to her.  Betty was at UCTS from the fall of 1957 to the spring of 1959 but before graduation she was engaged to Barrie Cade. Her plans to be designated were set aside.  During her year of engagement she was the Christian Education Director at Wesley Mimico United Church in Etobicoke. It was the era when there were 200 in the Sunday school: TEACHERS that is!

For some years Betty and Barrie and their two young children Janet and John lived beside Lake Ontario.  At that time they attended Alderwood United Church and Betty was active in Christian Education.  They moved to Markland Woods when the children started school and later they moved to the Kingsway area of Etobicoke and they began attending Islington United. Again Betty took an active part in Christian Development and the United Church Women.  When her 4 grandchildren came along, they were a delight to her.

Betty had a natural entrepreneurial flair and in addition to caring for her family, Betty played a significant role in the management of Glen Cade Pharmacy, a popular and successful community drugstore in central Etobicoke that she and Barrie owned.

Betty approached life with enthusiasm and vigor, and faced her death with strength and peace.  She died on August 28, 2014.  Her funeral was a true celebration, the way that she would have wanted it.

Memorial written by Caryn Douglas based on biographical information from Wilma Cade, her sister in law, September 2014.