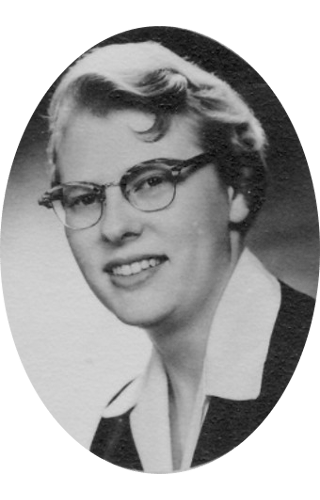 Geraldine Dearing Bould
Back to Index

Geraldine Bould was a bright, capable woman, who brought skill and wisdom to the ministries she conducted in her long career serving congregations and church institutions as a lay person and as a Deaconesses.

Geraldine Gladys was born in 1928 in Billings Township, on beautiful Manitoulin Island, just like her parents, Milton (b 1887) and Emma Jean (Tustian) (b 1891). The island in Lake Huron would be her home for much of her life, but she had adventures in other parts of the country. After their marriage in 1911, her parents bought a farm where they raised their 6 daughters. Geraldine was their youngest. In 1942, after Milton’s sudden death following a short illness, Emma and Geraldine, the only child still at home, moved to Mindemoya so Geraldine could attend high school.

The United Church played a central role in the lives of the Dearings. Emma, whose parents lost five children in a period of two weeks to diphtheria, became devout Christians in the search for solace for their grief and she was raised in that atmosphere. She lived to be 98 years old, remaining active in the church throughout her life.

Gerry made the decision to attend Bible College following high school and from 1946 to 1949 she was a student at Emmanuel Bible College in Kitchener. After her graduation she returned to Mindemoya and was employed in a local dairy until she found a position as a Children’s Supervisor with the Woman’s Missionary Society (WMS) at the School Home in Lachine, Quebec. The Church operated a number of these residences across the country, begun generally so children could access schooling not available locally. Often this was high school, but in some cases younger children were sent to the boarding homes. The church endeavoured to keep Board rates within reach of most families. As road transportation improved, and more schools were built, the need for these homes was in decline, and most were phased out by the mid-1960s.

At Lachine, many of the residents, ages 5 to 12, were the children of immigrants, some of whom lived in nearby Montreal. Others came from countries in Africa and Europe. Reasons for sending children to the residence were varied: local children were often in the residence from Monday to Friday, so both parents could concentrate on working (sometimes two jobs), and language acquisition. Foreign children frequently went long periods of time without seeing their parents, who might have been Canadian nationals working abroad, or other nationals seeking better educational opportunities for their children in a protestant and English environment. In 1953, the Matron at the Lachine home wrote, “One boy who left one Saturday night last June called us on the telephone before eight o’clock Sunday morning and called a second time before noon that day.” The “Home” was indeed “home” for these children, at a tender age of formation.

Some similarities between the Homes and Indian Residential Schools exist, although there are also differences. The purpose of the School Homes, as described by the WMS in 1952, “is to give a positive evangelistic witness which will lead the young people in our institutions to a personal acquaintance with God. This is expressed through the service given by the Matrons in our School Homes and by residence training. We are also using the community services to meet the need, lifting the sights of these young people and encouraging them to participate in community and cultural activities.” The majority of the staff who worked in the Homes, like Geraldine, saw their service as ministry. She left this work to attend the United Church’s Albert College in Belleville, where she studied for two years; a call to ministry planted in her imagination.

The summer of 1954, a summer ministry position brought Gerry back to Northern Ontario, as she ministered to a 7 point charge near Matheson and travelled in the area doing leadership development for the WMS. In September she began at the United Church Training School in Toronto, with plans to complete the two year program and become a Deaconess.

It was an exciting time to be at UCTS, with the new building on Charles Street adjacent to the University of Toronto and Emmanuel College under construction. She was among the first students to load their trunks on the elevator and occupy the modern, impressive 4 story building. She was also privileged to study under three outstanding women: Harriett Christie, Katharine Hockin and Jean Hutchinson. UCTS was teaching a liberative theology for the time, much more on the edge than the neo-orthodoxy which still dominated Emmanuel.

At graduation, Geraldine was designated as a Deaconess and commissioned as a Missionary by Hamilton Conference, and returned to northern Ontario as the WMS Missionary at Large in Superior Presbytery. For each of the four years that Geraldine worked with four congregations west of Thunder Bay she wrote an annual report for the WMS, providing a good look into her ministry there.

In the congregations she led worship each week, taught Christian Education in the public school, along with other volunteers led CGIT, Mission Band for the girls, and an Explorer program for boys and girls. There was the Christmas pageant, home visitation, special services, Vacation Bible School, WA and Church and Home for women, communicants classes and weekly radio devotions (popular despite the advent of TV). She was on the regional CGIT Board, WA Presbyterial Executive and active in summer camp leadership. In 1959, Geraldine coordinated an exchange program with her UCTS classmate, Merrill Brown who was now a missionary in Japan. Teenage girls in each community prepared stories and scrapbooks. She introduced a study on Christian denominations to the Hi-C (senior teens) and took them to Thunder Bay for a weekend where they attended a Roman Catholic service and met with a rabbi at the synagogue. She took a continuing education program on Broadcasting and wrote, “It is my continued privilege to conduct Evening Devotions over the Fort William station Friday evenings … Although it takes a great deal of preparation and time in travelling, I do enjoy [it] very much.”

What is clear from Geraldine’s accounting of her work, is that she was functioning in almost every regard as an ordained minister would have at the time. Her reports comment on many specific worship services; Easter, Christmas pageant, Good Friday, Thanksgiving, but not one word is devoted to sacraments. Geraldine would not have been granted a license; an ordained minister would have come to give communion, confirm and baptize. In the way she describes her work though, an alternative sense of sacrament emerges. In style and perspective her ministry was diaconal. Over the four reports there is steady evidence of Geraldine passing the leadership on to the people, having inspired and then equipped them to take responsibility, she stands back and lets them proclaim their faith in worship and action.

In her final report for 1959 – 1960, she writes, “I left the charge on December 22, [1959], after three and a half years work amongst the people of all ages, and I am happy with the response and co-operation and the increased Christian conviction and outlook. I am confident that the Field is now in good hands under the leadership of two laymen.” This proves the adage that it takes two men to do the work of one woman! She continues, “On December 29 I was married in my home church in Mindemoya and now settled in the Manse in Big River, Saskatchewan, happy to be sharing in the work of the very large mission field.”

Geraldine may have shared the work with her new husband David Bould, but she didn’t get any official recognition, nor any financial compensation. By the time the disjoining rule for marriage was revoked, in August 1960, Geraldine had already resigned from the Order. What Geraldine didn’t know, was that as early as the mid 1950s, exemptions to the rule disallowing women to continue in the Deaconess Order if they were married were being considered. It is unlikely that the Committee would have granted her one.  Those which were granted were quite restrictive, for example, only for the duration of the specific appointment the woman was in. Since she was leaving her appointment, and didn’t have another one, Geraldine’s application would have been rejected. After 1960, disjoining continued, for some women when they married, but for the majority the disjoining happened because they no longer worked for the church. The church was very clear up to this time that the diaconate was NOT ministry and it was not a life-long vocation: it was temporary service and ended with church employment. In the swirling context of rapid change in the 1960s, this theological viewpoint started to be challenged, as Presbyteries retained non-working Deaconesses on the roll. It took a while for the official doctrine and policy of the United Church to catch up.

The cultural norms of the time were a factor as well. Even Geraldine, who was 32 and had demonstrated her skills and independence, would follow her husband. The chances of her finding church employment northern Saskatchewan were small, another factor in her case. Regardless, the Deaconess Committee did not make any great effort to provide the women with all the information available to support their decision making.

Big River was David’s settlement charge, and big is an apt descriptor: 1500 square miles northwest of Prince Albert. There was no way to cover the distances by car so David bought an airplane. In an Observer article (1975) he gives this description, “We were right out in the bush. When we first went there, the Indians [sic] were still using horsecarts. We had electricity, but everyone still drew water from wells, with a rope and a bucket. There were not sewers, not even any septic tanks. Some friends of ours who were missionaries in Africa, were fascinated by our outhouse – they’d never had to use one themselves! But the Home Missions Board refused to call it a mission” and provide extra support for the distance to be travelled. He concludes that only First Nations people on reserves or in the inner city seemed to be of interest to the church.

Geraldine’s first son, Jack was born while they were in Big River. Their second son, Douglas was born a few years after they had moved in 1964 back to Geraldine’s island home and a pastoral charge at Gore Bay where David served for 15 years and 2 years at nearby Ice Lake.

In 1973, the pastoral charge of Silver Water, neighbouring Gore Bay, was vacant. Gerry decided to apply and sought reinstatement. The return of her status was accomplished “after jumping through several hoops”. She was reinstated to the Diaconate by Hamilton Conference in 1973. When the General Council apologized to the women who lost their status through the disjoining rule, each Conference was expected to hold a similar service of acknowledgement. When Manitou Conference conducted a service, Geraldine was invited to share her story with those present. It was a moving experience for all involved.

A few years later she teamed with David at Lions Head. When Gerry and David divorced, she moved into solo ministry positions as a Diaconal Minister at Tobermory, Owen Sound and Mattawa.

In 1993 she retired back to her island home where she contributed important leadership to Manitou Conference and was an active and significant presence in her congregation. Gerry died in the nursing home where she was living at the age of 86 on September 16, 2014. Friends remarked that she continued to serve among the residents and staff at the home with her kindness and companionship.