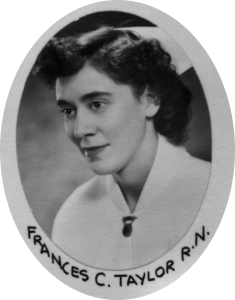 Frances Taylor Cline
Back to Index 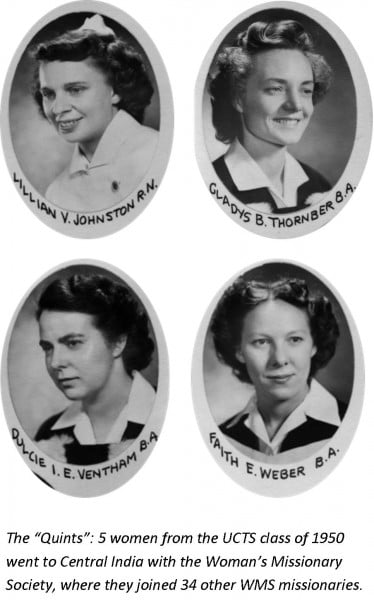 The “Quints”: Five women from the UCTS class of 1950 went to Central India with the Women’s Missionary Society, where they joined 34 other WMS missionaries.

Frances Taylor was born July 18,1922 in Edmonton, Alberta to Geoffery Bradford Taylor and Jean Frances Millar. She was the second of 4 children; John, Neil and Peggy were her siblings. She lived in Edmonton during her school years, spending most summers on the beautiful shores of Gull Lake where her father taught her how to swim. After high school she spent a brief while working in a bank. Next she was off to nursing school at the Vancouver General Hospital where she graduated in 1946. While studying there she became great friends with her Aunt Doris and Uncle Sid. She worked for a time in the case room delivering babies which she very much enjoyed. For a season in 1948 she attended Naramata Centre near Penticton, BC, operated by the United Church.

The United Church Training School in Toronto was her next destination, in 1949, preparing to fulfill a call she felt to serve on the mission field. As Frances completed the year long program designed for missionaries, India beckoned her and in the fall of 1950 she arrived! She was part of a team of five graduates, all under the employ of the Woman’s Missionary Society, who went to Central India that year. They were known as the ‘Quints’.

Central India was a large mission field for the United Church and the WMS, both of whom appointed staff to health care (hospital and public health), evangelical, and teaching ministries. Thirty eight women were appointed through the WMS in 1950. (A list of these women) Margaret Drummund was the longest serving WMS missionary in India; her first appointment began in 1911 as a Presbyterian Deaconess.

From a 1955 United Church publication:

There are seven hospitals today in several of which there is a Nurses’ Training School. The latter have made a tremendous contribution to India. It is estimated that 80% of all nurses in India are Christian and the product of Christian training Schools. More recently greater attention has been given to preventive medicine through the development of Public health Centres in which personal hygiene and sanitary education are stressed.

On the way to India, Frances made a stop to visit relatives in England. Arriving in October in Bombay (now Mumbai), she took a train to central India, to the city of Indore. The first winter was consumed with language study for which she had a real knack. In the spring of ‘51 she went to Landour to continue language studies. Upon completion of her studies she was appointed to Indore Christian Hospital as a teacher for local nurses. She spent the next four years in this capacity.

In her 1954 report to the WMS, penned in partnership with Kay Metheral, another WMS nurse, Fran wrote about the opening of the new hospital:

After many years of planning, the long-hoped-for hospital was at last ready for occupancy in June and with great excitement we plunged into the moving of patients and equipment. It was a day we will never forget … in the midst of all the problems, patients, relatives and staff were good-natured and filled with delight that at last we had really arrived.

We have tried to make the new clean airy surroundings attractive with bright curtains and large pictures. One group sent us a roll of seventeen very large pictures of “The Life of Christ,” which we had framed using a donation of money sent to Dr. Whittier. They make the wards so attractive and they are so useful in teaching patients the stories of Jesus. A great deal of our work is teaching, for consciously or unconsciously we are teaching 24 hours a day, not only formal ward and classroom training of student nurses, midwives and compounders, but also teaching patients and their relatives habits of cleanliness, nutrition, need to come for medical advice early, prevention of disease, care of infants and children, etc. It is difficult for us to evaluate our evangelistic work because patients are usually in hospital for a comparatively short time, but they do have an opportunity to hear of our glorious faith. All patients and relatives who come for examination or admission are taught while waiting their turn in the Reception Room. Short services are held in the corridors or courtyards each afternoon and many of the patients look forward to the arrival of our Bible-women.

Included in our hospital family are five elderly women who for many years were connected with some part of the hospital or Church work, and now they are retired and living in a little house near the hospital. Three of them are blind, but it is a real joy to visit them for in spite of their handicaps and very limited means they are filled with thankfulness for the many blessings and kindnesses which they feel are showered on them. They receive food from the hospital but help to keep their house clean and they even have a garden. They are never happier than when singing together (each in her own key) the Hindustani hymns of praise.

But things were about to change. She became a good friend with a senior missionary nurse. Fran had said to her one day that she loved her so much! The senior nurse scolded her back saying ‘you need a husband to love! You need to pray for a husband!’ And wouldn’t you know it, a new face came on the scene and swept her off her feet. Fred Cline, an ordained United Church minister, appointed by the Board of Overseas Mission, married Frances on December 12, 1955 in India.

They were then appointed to the village of Khaura, India. The following spring they moved to Landour in Northern India so Fred could continue language studies. Then in July of that year Frances, who was pregnant, made a solo trip back to Edmonton because of health concerns. Their first child, John Charles, was born in November. She was surprised how strong a baby John was! Fran and John returned to an anxiously waiting Fred in March 1957.

Their next stop as a new family was to Banswara in the State of Rajasthan. Fred was working with local pastors as the area superintendent. In 1958 they joyfully welcomed a daughter, Margaret Jean. In the spring of 1960 they headed home on furlough, taking a world cruise along the way, arriving in Vancouver. The summer was spent on the prairies visiting families in Saskatchewan and Edmonton. In the fall they headed off to the big apple (New York) for furlough studies where Fred received a Master of Religious Education. They returned to the prairies in the spring of 1961. Unfortunately because of health concerns for Fran they were unable to go back to India, so Fred took a one year appointment with Robertson Wesley United Church in Edmonton, followed by another year at St Andrews United Church in Edmonton. Frances was always a very loving mother and wanted another child in their family. They adopted Jeffery while in Edmonton.

In June 1963 they accepted a call to Creston United Church in the beautiful BC interior. Oh how Fran loved the fresh fruit and canning the harvest. In 1967 the Mission Board asked them to consider returning to India and they agreed. The bags were all packed but no travel visas materialized. They spent the winter in Richmond BC hoping and waiting for the visas, but they never came. The times were changing. Former colonized nations, such as India, were exercising their independence and rejecting the presence of foreigners, even though the United Church had handed over full authority and responsibility for the evangelistic work to the Maiwa Church Council of the United Church of Northern India in the mid-1950s as a part of a long series of steps in devolution from the Mission to the Indian Church. Recognition was being made in Canada though that even the progressive missionary efforts of the past century needed to give way to new expressions of mission and service.

You can take the kid from the prairies but not the prairies from the kid so when the United Church in Vermillion, AB extended a call they gladly answered. It was a very happy situation. Then in 1974 they accepted another call and moved to Calgary to pastor at Hillhurst United Church. Next came a move to New Westminster, BC, after accepting a call from Shiloh United. This thought excited Fran as she had really enjoyed her previous time in Vancouver. Here is where they bought their own little house qualifying for a first time homeowner’s grant! In 1990 Fred hung up the clerical collar. They lived for a while in White Rock, BC then Lacombe, AB before ending up in Nanaimo, BC, living with son John and Joy.

Fran was very fond of the sea. Collecting shells, rocks and such on beach walks was a favorite activity. She also loved plants and had a green thumb. There was always a special place in her heart for animals and over the years she had several pets including cats, dogs, birds and turtles. She was a great cook and spent hours over the stove preparing savory East Indian dishes. Prayer was always a very important part of her life, including being a part of small prayer groups. What a great intercessory prayer warrior she was! She made a lifelong habit of studying her bible, made easier by her love of reading. Fran became particularly close to one of her sister’s-in-law, Vera Cline.

This biography was written by Caryn Douglas in 2015, drawing from the Fran’s published obituary. Excerpts from Seventy Five Years in India, The Committee on Mission Education, United Church of Canada, 1955, and Missionaries Reporting, Woman’s Missionary Society, 1953-54.