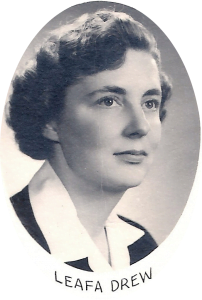 Leafa (Drew) McNeil
Back to Index 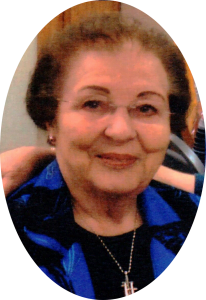 Leafa Drew contributed much to enrich God’s world through her faith and her music – she was a practical Christian – she accepted the blessings of God in life, and met the difficult times with quiet patience and understanding. Leafa had to decide in 1957; would she marry or follow her strong calling to be a Deaconess. With her practical orientation, she decided she could still do the work in the new vocation of Minister’s wife. It was a vocation Leafa embraced and a ministry she gave freely and intentionally alongside of her life partner Al.

Leafa’s life journey began on January 3, 1930 in the village of Moscow, in southeastern Ontario. Her family bought a farm shortly after her birth and she grew up there along with her two younger brothers. She enjoyed the rural life that centered on family, church and community, but she wasn’t meant to be a farmer. Her hands were no good at milking a cow, but they sure could play the piano.

Mocow United Church, where the Drew family were regulars, welcomed her musical talents, at the keyboard and in the choir. She had a good, strong voice: one year she won the hog calling contest at the Fair. She was in demand to sing at community concerts, weddings and other events – and that continued all her life. As a young adult she took singing lessons, and achieved her Performance Certificate in Voice from the Royal Conservatory in Toronto.

Normal School in Peterborough was followed by teaching: first in a rural one room school with grades one to eight. Later Leafa taught in Kingston, where she headed up the Music program. Things were going well for her, yet, she wasn’t feeling fulfilled.

In 1955 Leafa acknowledged the nagging call to a church vocation and responded. She felt that as a Deaconess she could use her teaching skills and be involved in the church activities which gave so much meaning to her life. She enrolled in the United Church Training School and moved to Toronto in the fall of that year. It was an exciting time to be at the school. The new building on Charles Street, next to Emmanuel College, had just been opened. Student enrolment was strong, the demand for Deaconesses to serve post war expansion congregations was large. The teaching staff included Jean Hutchinson, Katharine Hockin, Harriet Christie, all intelligent, capable women. For her summer field work Leafa travelled west for the first time, and was a Summer Student Minister for two congregations near Rosetown, Saskatchewan. Her plans were as solid as the enthusiasm she felt as she returned to Toronto for the second year: until she met Al McNeil at Emmanuel College that year to complete his last year of theology before ordination. Instead of designation as a Deaconess, she became a minister’s wife in the summer of 1957.

What Leafa didn’t know, was that in 1957, exemptions to the rule disallowing women to continue in the Deaconess Order if they were married were being considered. It is unlikely that the Committee would have granted her an exemption, the only ones being granted were for women already in the Order and then they were restrictive, for example, only for the duration of the specific appointment the woman was in. The cultural norms of the time were a factor as well. Leafa would follow her husband, that was just the way it was, and the chances of her finding church employment in the small towns in which ordinands were settled, were small. The point however is the information was not widely shared, and students facing the decision that Leafa faced did not have access to it.

Working together, the life of the Church was central to the McNeil family, with pastoral charges in 100 Mile House, B.C.; Edmonton, Red Deer, Calgary and finally Fort Saskatchewan. Along the way they had 3 children and that kept her busy as well, but there was always time for the church. Leafa was the pianist, Sunday School teacher, Choir leader, UCW member, whatever role was needing to be filled, she offered her skills. She also led community choirs and in sang in leading choirs in the communities in which they lived. She taught singing, and some piano, and took great pride in the successes of her students.

Leafa died at age 83, on December 12, 2014. It was Al’s birthday, which she remembered. He brought a piece of cake to the hospital and she ate a bite. She died a few hours later. Al reflected later, “we were always a team. We had different talents, but we worked together. She was the kind of teammate you hope for, but never imagine you will find.”

Remembering Leafa during the memorials for women who served the church at the 2015 Meeting of Diakonia of the United Church of Canada is one way to claim and acknowledge the vocation of minister’s wife and honour the women who lived it.

This biography was written by Caryn Douglas in 2015, drawing on the eulogy written by Kirk, Leafa’s son and a 2009 interview with Leafa and conversation with Al after her death.