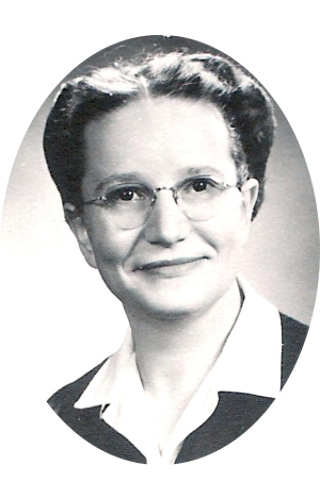 Daisy Rickard
Back to Index 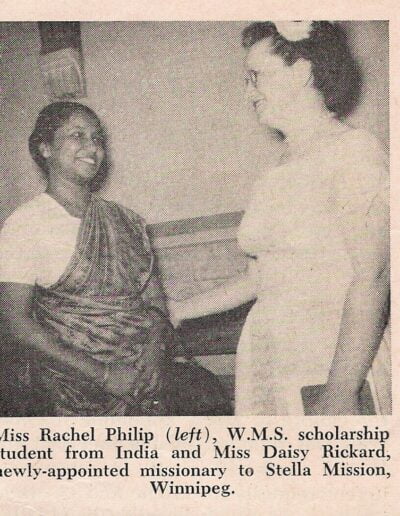 Daisy Rickard was born January 21, 1925, just 6 months before the Church to which she dedicated her life was created.  She grew up in the east side of Toronto and offered many forms of leadership in groups and committees in her home congregation, Bellefair United Church (now Beach, through an amalgamation with Kew Beach). A graduate of Danforth Technical High School with a specialty in home economics, Daisy had worked in a variety of food-related companies but she wanted something more. She applied for a position in cake decorating but as it materialized, a call to become a Deaconess intervened.

It was not easy for Daisy to pursue studies beyond high school. The family knew financial struggle well. Her father became blind when the children were young and her mother sought employment to support a large family.  But Daisy was determined. Her application to the United Church Training School was accepted. Since her high school program did not include Grade 13, Daisy was required to take a special college course prior to entrance.  She began her program of studies at UCTS in 1957. Upon graduation in 1959, she was designated a deaconess by Toronto Conference. She chose to work as a missionary with the Woman’s Missionary Society.

Her WMS appointment took her to the poor neighbourhood of north end of Winnipeg, where she was the community worker at what was familiarly known as Stella Mission, which was encompassed in the larger All Peoples’ Mission. Her work there was largely with children and teens, in weekly groups, vacation school and camping. Daisy is remembered as one who was committed to her work in the north end and to all who lived there.

A colleague at that time shared a story about of Daisy.  Daisy had invited her CGIT group, which involved a high proportion of aboriginal girls, to have one of their meetings at her apartment. The landlady objected. Daisy promptly moved, not just the meeting, but all her possessions – to an apartment where aboriginal people would be accepted at the same level as she was.

Others who knew Daisy during her Winnipeg years noted that although she was a private person, she would often surprise them with her sense of humour. Daisy lived in the Wolseley area and travelled on the bus. A woman who was a young girl at the time shared this story:   Several of the streets in the Wolseley neighbourhood were named after nuts – Walnut, Chestnut etc.  Often the driver called out the street names as they moved along. On one particular day the driver called “Chestnut!”. “Walnut!”, and some other nuts. This narration of the names of nuts “tickled Daisy’s funny bone” and she delighted in telling this story over and over to staff.

In 1965, Daisy took advantage of the furlough year provided every five years by the Woman’s Missionary Society. It was a time for restoration and further education. It usually included some responsibility for interpreting their work within the larger community of the United Church of Canada.  Adding another year at her own expense, Daisy was able to complete work on her B.A. degree.

Moving to Saskatchewan in 1967, she served as Lay Supply (since Deaconesses were not considered to be “ministers” at this time) with Esterhazy and Tantallon in Yorkton Presbytery.  It was a team ministry, and she was responsible for Christian Education.  During another furlough in 1970 she studied theology at Emmanuel College, in Toronto. In 1971 she resigned her WMS missionary status (which by then was under the oversight of the Board of Home Missions) and became a candidate for ordination. Two years later, June 3, 1973, she was ordained by Saskatchewan Conference. In the years that followed, Daisy worked in congregational ministry in Qu’Appelle, Battleford and Moose Jaw presbyteries in Saskatchewan.

Daisy retired in 1990, returning to her beginnings in Toronto and in Bellefair United Church (now Beach United Church) where she served in many ways. She even returned to her childhood home on Bellefair Avenue where she lived with her sister Mary.  She died September 25th 2015 at 90.

At the Celebration of her life, a neighbour described the everyday interests that captured Daisy:  “She loved many things: dogs, squirrels, cacti, knitting, Swiss Chalet, the United Church.  And she did love music, particularly Bach and Beethoven.  Whenever she was asked “How are you?” the answer was always, “Alright so far.”

Daisy had been an active member of the UCW until about a year before her death. She regularly led the reflection at these meetings and they were often justice-focussed.  A member of the group now has her book where she wrote those reflections and prayers. Her faith-filled words live on.

After her death, her church home noted with appreciation a generous bequest. Accompanying this announcement were the words:  “Daisy was a woman of few words and a dry wit, and she was always fiercely independent.  Her dedication to social justice ran deep throughout her life.”

This biography was prepared by Dorothy Naylor, one of Daisy’s classmates, in June 2017.