Kay Pearson
Back to Index 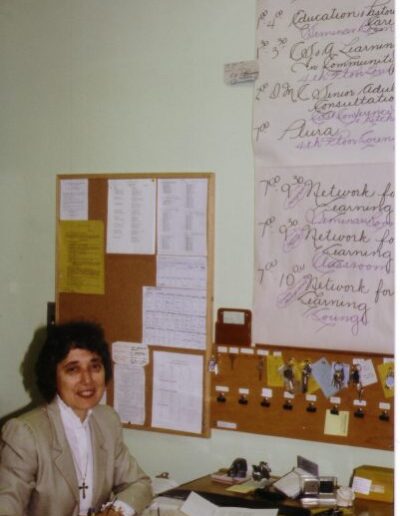 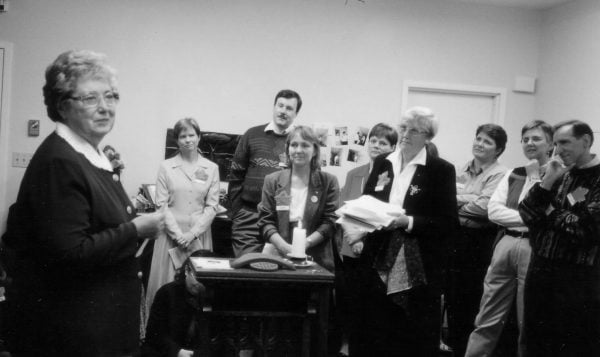 Catherine (Kay) Pearson, born December 27, 1927, was in diaconal ministry. She knew that ministry was the work of the whole people of God and Kay had an unwavering faith in God.

From 1968 (Receptionist 1968-81, Coordinator of Residential Services, 1981-90) until her retirement in 1990 she contributed much more to the Centre for Christian Studies than her position would indicate. She was a spiritual advisor and a listening ear, go between, creator of energy and joyful spirit, mother, sister and friend to many. She was a strong woman, but she was never threatening to those who were vulnerable.

Kay was an active United Church lay woman from her Young People’s Union days at Carlton Street United Church, Toronto. When Carlton Street amalgamated with Sherbourne Street in 1959 to become St. Luke’s United, she joined Jean Hutchinson and Harriet Christie, both on the staff at United Church Training School (later Centre for Christian Studies) as members of that new congregation.

Kay had always wanted to work with people. She was employed first as a secretary as Harrison Company and then worked at United Church House when it was located at 299 Queen Street West, Toronto. Raising her two boys she did volunteer work at the Children’s Aid Society and later was offered the opportunity to work there on a full time basis as head of the teenage unit (1964-66).

Kay had heard much about the United Church Training School/Covenant College from her friend, Bessie Lane, a graduate and member of the staff. In 1968, Harriet Christie asked Bessie if she thought Kay would be able to sit long enough to be receptionist at Covenant! Kay began that year as part-time receptionist and in November, 1971, became full time receptionist. She remained in that position until she was named Co-ordinator of Residential Services in 1981. In that position as a member of the Administrative Staff (with the bursar and registrar), Kay worked hard to prove that she could carry the added responsibility. She realized the pain of having to make very difficult decisions in a more senior role as she struggled to balance her responsibilities with her big heart.

People who were students or residents generously describe Kay. She was “the soul of the place”, “mother hen”, “the one who cared about the whole person”, and “a shoulder to cry on”.

Anne Elliott, a graduate in 1973, was very young when she came to CCS. She said:

There was somebody right there that cared about you…. It was a secretary’s job and yet she transformed it totally – she loved everybody – at least that’s what came across. You felt like she was the ambassador for the place. If you were bringing a guest, you would want them to meet Kay.

She was a kind of sunshine. She knew what was going on. She also tried to do some intervention on behalf of the students. She heard us; we lamented to Kay all the time and she would just say “Hello, dear, How are you?” and “I think you need a hug”. She was the kind of Holy Spirit that at times held the place together.

Kay kept in touch with many who were students during her 22 years on staff and remembers special things about each one. She had special names for some because of specific experiences with them. At Christmas she sent many cards, but she received just as many, filled with news and pictures of children and grandchildren of the many, many friends she had made. She posted them on her office wall, and after retirement they filled books she kept. She was proud that she was connected across the world through graduates and others who had lived in the residence.

When Kay retired a great celebration was held and graduates came from many parts of the country. Lori Stewart created a quilt from the squares people had been asked to submit. It was one of Kay’s cherished possessions. The gathered crowd sang Kay’s favourite song “Take, take off your shoes, you’re standing on my holy ground”.

In October, 1999 there was another celebration of Kay’s ministry when the key gathering space in Woodsworth House, the new CCS building in Winnipeg, was named after her and the Kay Pearson Bursary Fund was established. Kay’s warm laughter ringing through Woodsworth House assured many that the Toronto heart of CCS had made its way west to be continued in the new home.

After retirement Kay remained active in congregational life. With her beloved partner Jack Pearson she relocated to Peterborough, then back to a couple of different locations in Toronto. Everywhere she lived she got involved and made friends.

Along with her good friend Etta Snow, she travelled, including attending the World Council of Churches meeting in Harare in 1998 and the Festival for the conclusion of the Decade of the Churches in Solidarity with Women in Church and Society. She joined Etta in visiting Angola on that trip. Kay actively supported the Angola Memorial Scholarship.

Kay loved her family and she was proud of them; Darrell and his wife Mary of St. Catharines; their children Stephanie (Jamie) and Alexander, and her son Bill of Kenilworth, Ontario. When Jack took ill, Kay nursed him. His death in August 2007, was a big blow to her. He was a warm and caring man, with a sense of humour which equalled Kay’s. She missed him greatly.

At the end of her life, Kay was in the Algonquin Grace Hospice, in Huntsville, near her sister and friend, Barbara (Sanderson). David Hallman, a member of Saint Luke’s where Kay remained active even when she lived in other communities, shared these words the week after Kay’s death on her 88th birthday, December 29, 2015.

After worship on Sunday, January 3rd, our Saint Luke’s United Church (Toronto) congregation gathered to hear stories and watch videos taken by the twenty-four Saint Luke’s members who visited Kay the previous Sunday in her hospice in Huntsville. It was an emotional and spiritually-enriching time together. Kay died two days after the visit.

Though partially paralyzed at the time of the visit, Kay:
– recognized and greeted everyone by name;
– requested and sang along with many songs performed by the Saint Luke’s Praise Team;
– listened with tears in her eyes as many spoke of how much she had meant to them through their lives;
– responded to each testimonial with “I give you my heart”;
– quipped “are you proposing to me?” as one young man knelt in front of her holding her hand;
– heartily joined in the musical benediction used frequently to end our services at Saint Luke’s.

This biography was written by Caryn Douglas in 2017, drawing on the Profile prepared by Gwyn Griffith for her book, The Changing Tapestry, a history of the Centre for Christian Studies and her online obituary.