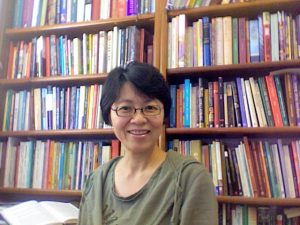 JungHee Park
Back to Index 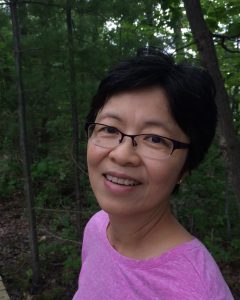 In Algonquin Park on a canoe trip in 2014. JungHee was a gifted scholar, bringing critical analysis and creative re-imagining to her work. 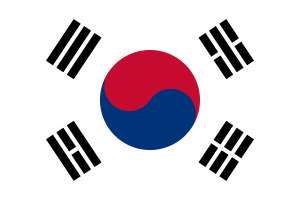 JungHee Park was born on November 29, 1964 and died peacefully on Sunday, January 31st, 2016 at home at the age of 51, after living courageously with cancer for a year. After finishing graduate studies in theology at Ewha Womans University in Seoul, Korea, she worked with labourers marginalized in the process of the industrialization of the country through Sandol (Living Stone) Presbyterian Church and Cultural Centre for eight years. After immigrating to Canada and preparing for ministry through the Centre for Christian Studies, she was commissioned as a Diaconal Minister and settled into Fingal United Church (Ontario) in 2005. While working with that congregation, she began a programme toward a Doctorate in Theology at the Toronto School of Theology in 2008. Her research explored an alternative concept of diakonia as companion rather than that of servant. Her most recent ministry was with the congregation of Trinity United Church in Grand Valley, Ontario.

JungHee was the beloved partner of Hyuk Cho and loving mother of Saepom and Luke.

The following is an edited version of the eulogy JungHee’s dear friend Kathy Douglas gave at her funeral ….

I stand and offer, with great honour, some insights and memories of this wonderful person. I met JungHee in the Social Justice Learning Circle at the Centre for Christian Studies when we were both students. How appropriate that is, as JungHee epitomised social justice, learning, and circles of mutual relationships of companionship. We became friends.

About ten years ago, JungHee shared these words at the Covenanting Service between my partner Gary and I, “You may have seen this UM/Yang symbol in the Korean flag. In a circle there are two moving parts, one is red and the other blue. These two are usually held in balance, or in creative tension…..as one increases the other decreases; as one decreases the other increases. They are in constant motion. One cannot exist without the other; they are interdependent. … The most important concept of Um/Yang is the harmony, balance and unity of the different energies.”

It is that imagery of constant balance, her own suggestion, that helped me focus my comments on JungHee’s life. There were many places in her life where she seemed to straddle two worlds or two energies tugging at her heart and soul. Often she seemed to remarkably maintain two positions…keeping in tension both sides and managing balance. JungHee straddled Korean and Canadian ways; trying to figure out how to honour both cultures, willing to be taught the best in each.

JungHee went into her congregational ministries at both Fingal and later at Trinity in Grand Valley, feeling conflicted.  She articulated her concerns: her english wasn’t good enough, she may not get her message across; the church was struggling and she might not help them bring up their numbers or finances; she worried her ideas might upset.  But she found her authentic self and despite her fears she challenged them. These words from Carrie Molson, a congregant at Trinity give evidence to how she was appreciated.  “In the short time I knew JungHee as the minister, she touched my life and many in the community.  I respected the many contradictions that made her who she is: her shyness did not hide her bravery, her quiet demeanour did not prevent her from speaking powerful and meaningful words, and her polite ways did not prevent her from standing up and speaking about what is right. She touched so many in her short years and I am grateful for the times when I was blessed with her presence.”

JungHee never doubted her diaconal choice in ministry; the educational model and theology of justice fit well. It is a stream of ministry that requires a constant defending and explaining and those who have choosen it know it to be often a less privileged path.  She was known to find her voice, speaking up to authority, and correcting misconceptions.  But JungHee, like many Diaconal Ministers, appreciated the push and pull of marginalization with the privilege that accompanies being a Diaconal Minister.

Even in that Diaconal Community she found tension and she sought balance.  JungHee found the image of servanthood, one that is accepted as representing diakonia, less than satisfactory. It never felt right to her, and in 2005 when she was commissioned, and given a basin and towel, she knew she had to challenge this image and perspective.  There again is the confidence along side her humbleness. She insisted on challenging the servant image as compliant in the church’s problematic perspectives on mission, drawing on the influential missiology of Katharine Hockin, a Diaconal Minister who educated women for diaconal ministry at the United Church Training School in the 1940‘s and 50‘s. The alternative JungHee held up for the community is companionship. A companion is “one with whom life and delight and the adventure of the road is experienced together.”

This excerpt from a paper JungHee wrote as she was begining her doctoral studies elaborates on this idea of companionship:

“I am among you to serve” (Luke 22:27)… one of the brochures uses these words to support diaconal ministry. We can imagine it must have been a very shocking, unconventional thing [for Jesus] to say to the disciples because the world they lived in was clearly divided into the classes of servant and lord and their clearly defined roles. I am guessing that in this unexpected word and action in that society, he meant to show how to build a more loving, respectful and more equal community without the traditional class division between human beings.

In today’s context, his action and words cannot be understood literally. We know that taking on the role of servant and behaving like a servant by bending the knee would not change our own social status. Our focus is on creating a more just world, in which neither we nor anyone else bends the knee to a lower class or tiptoes to the powerful. In John 15:12, Jesus calls us “friend,” not any more “servant.” Thus, we try to be friends with both people who are living with too little or too much. If we keep using the word “servanthood,” to me it affirms the unjust relationships in which we have been living. It also contradicts our favourite word ‘mutuality’. We can choose to bend the knee or tiptoe to the powerful whenever we like; that reflects a power which we cannot deny. It has been a long struggle for me to understand my privilege to choose in contrast to others who must live by bending the knee without choice. I think Jesus’ serving actions need to be understood as expressing his vision and dream of creating just relationships.[1]

JungHee had doubts when deciding to pursue her academic work at Emmanuel College, a place where they ordain ministers and not traditionally a diaconal environment.  This quiet woman had to push to get her thesis proposal accepted there and yet in balance she believed it was precisely the place that it should happen.  We are blessed by the work she started in her thesis. As her friend and mentor, Marion Pope has emphasized on more than one occasion, someone has to continue her thesis work.

I saw how JungHee sought the balance in her family, with her children Saepom and Luke, who she worried over and loved fiercly, and with her friend and partner, Hyuk.  She believed in him and was committed to him.  They had to find a balance between Korean ways and Canadian ways so that she could count on him to support her in parenting, her studies and her ministry, as she likewise supported him. When she was deciding to attend the Centre for Christian Studies, which would take her away from her home for several weeks a year, JungHee, who was the primary parent for her two small children, doubted it could work.  Caryn Douglas, the Principal at the time, remembers JungHee asked, “who will look after the children?” Caryn, presumptuously pointed to Hyuk, saying ‘him’.  JungHee obviously came to believe this and Hyuk obviously came to believe it too, as they found a new balance.

I recall a playful story she shared with me, full of authentic doubt and yet supportive conviction. Hyuk decided that they would become a wilderness canoeing family, exploring and reveling in Canada’s nature. She told me, with some annoyance:  “Hyuk really has no experience, he has learned about it from books and the internet; we have all the gear now and we are going.”  JungHee giggled, “Kathy…we might all drown.”  But she went, confident again that this was a good thing and that Hyuk had their best interests in mind. I know that these canoeing adventures became a very important part of the family life they shared.

At that event 10 years ago JungHee closed her remarks with these words, … which I repeat, “As we go forth on our life journey may God, friend of all, bless and keep you, in the embrace of loving companionship.” JungHee, our companion, you have helped each of us delight in life and we are thankful.