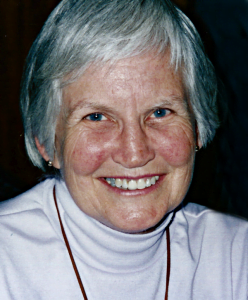 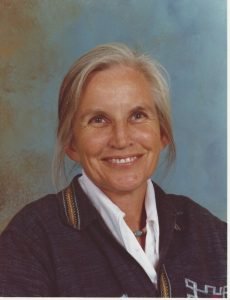 Peggy Alston was born between the two World Wars, the youngest daughter of Ernest and Ida Alston.  She grew up in a privileged home, the youngest of two children, in Forest Hill in Toronto; her father was in sales, her mother, a former school teacher, was at home. There was always a housemaid, and when the girls were little there was a nursemaid as well.

In high school Peggy thrived.  Almost always in the company of friends, she was beautiful, she was athletic, she was bubbly and full of energy.  Summers were spent at the family cottage.  Later she worked as a waitress at summer resorts: first in the Muskokas and then in New Brunswick.

In the summer of 1949, Peggy met Clifford Campbell at the Algonquin Inn and later that year they were married.  Within a few years they had two children, a girl and a boy. They lived for a couple of years in Quebec before moving to Toronto.

In 1958, Peggy and Cliff met Clarence Jordan, the founder of Koinonia Community in Georgia.  It was a meeting that changed their lives.  The following year the family packed up everything they owned and moved to Koinonia.  The community, established in 1942, had a clear purpose: to bear witness to the teachings of non-violence and to practice racial integration.  This was during the height of the Civil Rights movement and Georgia was still segregated at the time.  The community encountered mounting hostility in the mid-fifties because of this stance, but Koinonia held fast in the face of it all.  Over 70 years later, the community is still a vibrant, functioning place – and was, in the early 70s, the birthplace of Habitat for Humanity.

A year after their move, while speaking to a group back in Canada about his community experience, Cliff was asked by the United Church to consider becoming a minister.  He accepted their offer, and the family moved once again – to Saskatchewan this time – where Cliff took a lay charge and began his schooling for ordination.

That one short year spent in Georgia, with its deep experience of community and purpose was pivotal for Peggy, and for the rest of her life provided a foundation and motivation for all that she would undertake.

During six years in rural Saskatchewan, the family grew to four children and Cliff became ordained.  In 1969 the family moved to Jamaica where they served as missionaries with the United Church of Jamaica and Grand Cayman.  During her time in the West Indies Peggy developed a passion for service to others, particularly in the area of early childhood education.  She supported and started a number of primary schools in Kingston’s inner city – enriching their programs, facilitating training for their teachers and finding funding.  She also worked at Operation Friendship – an ecumenical outreach program to the underprivileged in western Kingston – one of the roughest slums in the country.

Peggy was courageous – a characteristic that took her into parts of the world and areas of work that were considered challenging, if not risky.  And she fell in love with the people of Jamaica – championing the needy and most vulnerable there.

Beulah, a young teacher who met and worked with Peggy in those years wrote: “It is simply unthinkable for Peggy not to accept responsibility…[it] is second nature.  Responsibility, especially when it involves working with underprivileged and disadvantaged people brings out the best in her….She worked tirelessly in Jamaica.”

The family moved back and forth between Jamaica and Ontario while the children grew up. In 1978, Peggy enrolled in the diploma program at the Centre for Christian Studies and graduated in 1980. The following year she was commissioned by the United Church to the Diaconal Ministry of Education Service and Pastoral Care.

Peggy was called to establish a community ministry in the Jane – Finch corridor of Toronto.  At that time, the area housed 90,000 people in 3 square miles.  Poverty was obvious and social problems were severe.  Most residents were members of visible minorities, particularly from the West Indies, so Peggy’s experience in Jamaica made her a natural choice for this work.  As an evaluation written during her time at CCS describes, “Peggy’s work with Cliff in Saskatchewan and in Jamaica has given her a strong feeling of being at home anywhere in the world, and an urgent feeling about international economic and social problems.  Peggy has profound faith that God’s direction is available for her life, and that it is for her to discern and respond.”

For five years, Peggy worked tirelessly at Jane – Finch to provide an ecumenical ministry there.  She developed youth programs and camps, arranged student exchanges, and facilitated recreation and learning opportunities.  She created services and programs for single mothers, started a day care and a library and conducted parenting workshops.  An article in The United Church Observer noted: “An unfailing optimist, [Peggy] sees her ministry as one which meets people where they are and helps them develop their potential in relationships and skills.”

Through her Jane – Finch ministry connections, Peggy, then divorced from her first husband, met Clare Geddes – another United Church minister who was working as a chaplain in corrections at the time.  Together they moved to Goderich where Claire served as Chaplain at the Bluewater Juvenile Detention Centre and she became a Pastoral Care Coordinator for the Huronview Huronlea Homes for the Aged.

When they retired from their respective jobs in the Goderich area, Peggy and Clare moved to the United Church retirement community of Albright Gardens in Beamsville, Ontario.  Here they enjoyed the community and the fellowship of Trinity United Church.  Once again, their home became a hub of activity and welcomed family from far and wide, for short or longer stays.  They spent winters in Florida and then Antigua, where they spent precious time with their grandchildren.  They participated with Habitat for Humanity on a build in Georgia – and they traveled widely, visiting over 40 countries, largely with Friendship Force.

Peggy had a powerful personality, with a strong will and the energy to match it. A friend wrote at the time of her death, “Peggy was an impressive woman.  She was very competent and always in charge of every situation.  She was a person to be admired for her caring and kindness to others.”

One of Peggy’s children, Carolyn, wrote of her, “our mother made a real difference in our world.  Peggy created opportunities, offered hope, encouraged change, and challenged injustice and discrimination – and it is that example for which I am most grateful.  She was open and generous and embraced cooperation and community.”

When Peggy moved to Albright Manor, she had a hard time settling in.  She had been diagnosed with dementia, possibly Alzheimer Disease, and it worsened quickly after her arrival at the long-term care wing, where her husband, Clare, also resided.  She had always been so purpose-driven and active that to take it easy was difficult.  She would get frustrated because her mind couldn’t focus the way it used to.  The staff at Albright noted, “She was an avid participant in our social programs … She was a ‘take charge’ kind of gal who possessed true leadership skills.  She called the ‘slackers’ to task – and we loved that about her!”