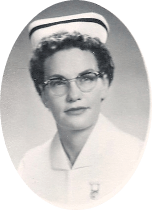 Catherine “Kay” MacLeod
Back to Index 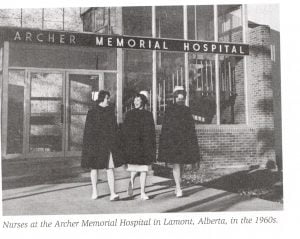 Nurses at Archer Hospital in Lamont, AB in 1960s 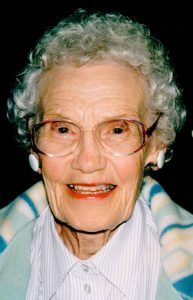 Fortunately, the United Church Training School attracted no shortage of spunky women, and Kay MacLeod was one of them.  She was born February 23, 1923 to Alex and Marion (Ross) MacLeod, one of 6 children.  Catherine was grateful for her family.  In her 80s she made a gift to the Centre for Christian Studies in their honour and she wrote, “They were top notch United Church folks, I can say with a smile.”

Kay ventured from her home in Glace Bay, Nova Scotia and graduated from the nursing school in Saint John, New Brunswick.  In 1958, after several years of nursing, and saving her money, she headed west for a year at the United Church Training School in Toronto before beginning a 14 year nursing career at the United Church’s Archer Memorial Hospital in Lamont, Alberta.  Kay was one 7 nurses in her class, most of them anticipating a career working in church hospitals. (see photo with names)

Lamont, now an easy 1 hour drive from Edmonton, was a frontier in 1912 when the Methodist church opened the hospital.  It grew rapidly and by 1917 there were 45 beds. Kay was following in the footsteps of Vellettia Shuttleworth, the first Matron of the hospital who graduated from the Methodist National Training School in 1910.  The second Matron, Sarah Slaughter, also attended the school, and was a Deaconesses when she assumed the role in 1913, a position she held until the nurses’ residence was opened and the nursing school begun in 1917.  The hospital graduated nurses every year after that until 1972 when the Provincial government legislated the end of hospital based training.  When Kay arrived on the scene, she witnessed the construction of a new 72 bed nurses residence, opened on February 8, 1960.  That same year a physiology department was opened.  In 1964, a 50 bed chronic care facility was added and in 1969 a 31 bed nursing home.  Kay was there during an exciting time for the hospital and the community around it.

Sadly, Kay was also there when an accident between a train and school bus killed 17 people and seriously injured 24.  It was an event that drew the hospital staff together.

As was the custom in all the church hospitals, the nurses employed by the Church were expected to carry Christian Education duties along-side their nursing.  Kay worked with mid week groups of Explorers and CGIT and was involved with the local congregation.

Kay’s work in Alberta was ended in 1974, because as the single daughter, she was need back home to care for aging parents.  She nursed at Cape Breton Hospital and Braemore Home before retiring.

Diaconal minister Laura Hunter captures Kay’s nature in this story: “I met her at First United in Sydney, in 2005, so she would have been in her early 80s at the time. Kay was maybe 5 feet tall in stature, but very tall in personality!  She was wearing a navy-blue jumper over a white blouse and had running shoes on her feet, reminding me of her nursing background, practical and ready to be on the move.  Under one arm she had a petition regarding a land claims dispute of the Lubicon Cree and over the other she had a bag of “Izzy dolls” to be used by soldiers stationed in Afghanistan in peace building with children.  Soon she had organized a lunch for me to meet two friends, a woman recently immigrated from Korea and a respected grandmother from the nearby Indigenous community.”

When Kay was reconnected to the Centre for Christian Studies in the early 2000s she was delighted, and became an advocate and keen supporter.   When the Principal, Caryn Douglas, came to visit her, she organized a presentation to the board of First United Church in Sydney, promoting  the school and diaconal ministry.  Kay was a networker and she facilitated good things happening.  Her warm smile and simple presentation belied her strategic abilities!

This biography was written by Caryn Douglas in 2018, drawing on Kay’s obituary and personnel correspondence.  Healing in the Wilderness  A History of the United Church Mission Hospitals, by Bob Burrows was a source for the Lamont hospital history.