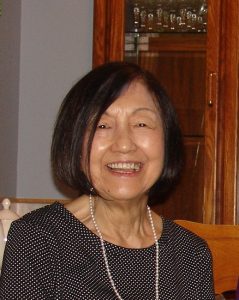 Nobuko “Noby” Matsugu
Back to Index 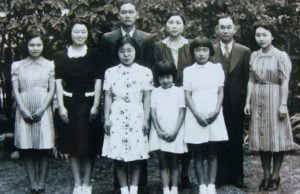 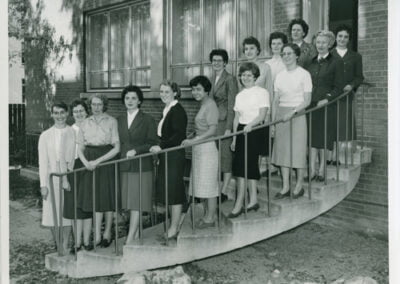 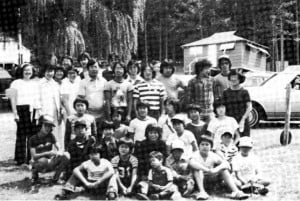 Nobuko, Noby, was one of 7 children born July 28, 1928, in the east side of Vancouver to Midori and Shuichi Sasaki.  One of her sisters, Kay Kuwahara, describes life there: “It was a nice, ethnic community.  Our best friends were Italians who lived next door.  There were very few Japanese … we grew up with Caucasians and always felt we were no different, except for our looks.”  But that was before December 7, 1941 and the attack on Pearl Harbour and the night that  Shuichi Sasaki, a successful business man, was taken away by two RCMP officers and sent to a prisoner of war camp.  Kay added, “When they took [our] dad away, our landlord and neighbours cried for us.  Fortunately, my mother was a quiet, stoic woman who never fell apart despite being left on her own with the whole family.” As a result of the War Measures Act, in April 1942, the family was rounded up as well, sent to an internment camp in Kaslo, British Colombia.  Noby was 14 years old.

After their father suffered a heart attack, he was allowed to join his family in Kaslo.  At the end of the war they relocated to Ontario, but it wasn’t easy with the level of racism that existed. Fred Sasaki, the oldest of the siblings, tried to find work for himself and his sisters picking fruit in the Niagara area, but the farmers wouldn’t hire them because they had Japanese ancestry.

When Noby enrolled at the United Church Training School in 1960, at the age of 34, she intended to be a Deaconess.  Instead, when she graduated in 1962, she married Ken Matsugu, a student at Emmanuel College. Before the evacuation from British Columbia, Noby and Ken had lived on the same street, but they didn’t meet until relocation to Kaslo.  With the end of the war, they went their separate ways, but as fate would have it, they found themselves both studying theology and preparing for service with the church.

Just as Noby was moving into the residence at 77 Charles Street in 1960, the Deaconess Order, admitting only single or widowed women, underwent a big change.  The disjoining rule, denying entry to married women and requiring Deaconesses to leave the Order if they married was overturned by the General Council.  But the news was slow to spread and to be integrated.  And although the disjoining was officially over, many women, like Noby, felt they needed to choose between being designated a Deaconess or the ministry of a minister’s wife.  Without regret, Noby chose the latter.

In the obituary and eulogy given at Noby’s funeral, Ken and Noby were consistently named as a ministry team.  She didn’t have the title, nor the pay cheque, but she was active in ministry. Ken and Noby went to their first placement in the Northwest Interlake Pastoral Charge and Fisher River Reserve in Manitoba. They then lived in Steep Rock, Manitoba from 1965 to 1969. While in Manitoba, Ken and Noby welcomed Bruce and Dee-Ann into the family.

In 1969, Ken was called to the Toronto Japanese United Church Nisei Congregation. Noby is remembered in the Toronto congregation for her enthusiastic involvement with all aspects of church life.  Noby’s nephew, Diaconal Minister David Kai wrote, “She was involved in CGIT, Sunday school and youth classes for many years, and I often taught with her.  Many summers we would take the class up for a week long camp at Lake Scugog, which our church leased [and called Camp Koyu].  She also served as a counselor or cook for many, many other camps.”

A decade later they moved west again, to the Steveston United Church near Vancouver, followed by the Montreal Japanese United Church. When they retired, they moved to Oshawa and then to Scarborough.

Congregants knew Noby as a kind, compassionate, humble, soft-spoken, hard-working woman, always ready to provide support and caring.  She was gifted at using empathy in pastoral care with people at all stages of life.  She sustained a youthful enthusiasm, sublime patience and an unfailing sense of humour all of her life. She was also an expert cook and baker. She became renowned for her perfectly-formed manju, tiny lemon tarts, and her chocolate-oatmeal cookies, which she made the Sunday before her passing.

Her family noted that above all they treasure Noby’s persistent Christian leadership.  She had a deep, abiding faith. Noby died suddenly at the age of 88, on January 12, 2017, and is mourned by her husband of 54 years, her children and grandchildren and other family.

This biography was written by Caryn Douglas, June 2017.

Correspondence from her family and her obituary.