Mae Walker Gracey
Back to Index 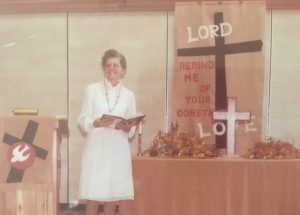 At Plura Hills United, Kelowna circa 1978 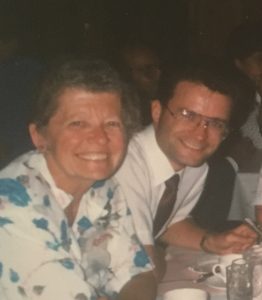 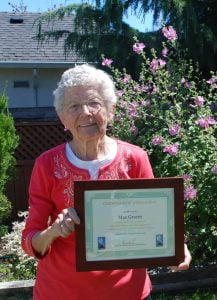 Katherine (Mae) Gracey was a spunky woman, she was passionate and spoke and acted on her passions with zest.

Mae developed her strong spiritual connection with the Christian call to service and justice in her growing up years in Grenfell,  Saskatchewan. She arrived on the steps of the United Church Training School in 1956, with plans to do mission work in Africa.  Meeting Bob, a theological student at Emmanuel College, changed her plans, and before she finished the program they were married.  But the Training School rules required students to live in residence. There was no residence for married students, so Harriet Christie told her she had to make a choice to live in residence or live with her new husband.  Mae chose the latter and as a result couldn’t continue as a student.  She was critical of the school which on one hand was advocating for women in the wider church; encouraging them to get degrees, leading the campaign to accept married Deaconesses, yet maintaining practices which were less than empowering. The lack of a diploma and formal recognition didn’t stop Mae from having a ministry career however.

Neither did it curb her sharp ability to do social analysis and her willingness to share her perspective. As her nephew, diaconal minister Russell Mitchell Walker said at her funeral, “Mae was always welcoming, working with and for, those who needed support. … It was a gift that also could put her on the edge of her community.”  She was impatient with institutions when they denied justice.  While living in the mostly Indigenous community of Bella Bella, Bob’s settlement charge, where Mae saw herself as a partner in ministry, she was given the name, “Esquteenoot”, which means “someone who welcomes all”.

She welcomed two children, Beth and John, born while at Bella Bella, and a third African American child, David, adopted a few years later. When they were old enough, Mae turned her significant energy to work with groups like Kairos, Project Ploughshares, refugee support and other social justice ventures.  Six women from a CGIT group, “Mae’s Graces”, which she lead in 1968 were present at her funeral to give testimony to how much she inspired and supported them.   One member read from their CGIT graduation speech of over 50 years before: “Yes, we were quite a group. But [Mrs. Gracey] said to us, ‘Girls, I can see a great potential in every one of you.’  She didn’t say, ‘now girls, you’re in Grade 10 now. It’s time you started acting like sensible young ladies.’ … we came to name her “Faith”.  She had so much faith in us that we actually had faith in ourselves.”  After her retirement to Parksville, on Vancouver Island, Mae resumed meeting  with members of the still continuing group!

In 1978 Mae worked tirelessly to bring together people from a diversity of denominational traditions to create Plura Hills United Church, in Kamloops and she was their first minister.  Donna Greely wrote, “Mae was our pastor, but as well, she was our spiritual leader, our friend, our confident, our counsellor … she reminded us we also had a responsibility to react in an ethical way. … [her] strong belief in Social Justice and that Jesus was a political figure led many of us into looking at our faith and lives in a much closer, responsible way than we had previously.”

Mae encouraged and mentored Russell Mitchell Walker into diaconal ministry.  Russell recalls Aunt Mae’s early advice was NOT to go into ministry.  She knew well how difficult ministry could be and she was blunt about the institutional church.  But when Russell became a candidate for ministry, she lent her support.  They found together common ground, with a shared theology based in practical justice making: addressing apartheid, promoting feminism, becoming advocates for First Nation’s issues.  When Russell came out as a gay man, he looked forward to sharing the news with Mae because he was confident of her unconditional acceptance of him.

Diaconal Minister Ian McLean, wrote, “[Mae] was the driving force behind Plura Hills United Church, the church I called home for many years.  She was my mentor and the first one to nudge me towards ministry. Had she not prodded me I have no doubt I would not be a Diaconal Minister today.”

In 2006, when the United Church apologized to women affected by the disjoining rule (a marriage bar preventing women from becoming, or continuing as a Deaconess) Mae was uncertain about accepting the apology.  David Giuliano, the Moderator at the time, wrote to Mae, saying, “I am grateful that despite [not being allowed to finish your education] you were willing to continue to practice a diaconal ministry using your many skills for leadership.”  Mae agreed, she just got on with what needed to be done.

In 2012, Nelson Reis, her Member of Parliament presented her with a Governor General’s Award for her human rights and peace work.  Recognition from Kairos came the year after.  As Russell acknowledged at her funeral, Mae lived out the gospel imperative to preach good news and proclaim release to the captives.  “We are better people for knowing her … Mae lived love and as such she embodied God.”

Mae died peacefully October 2, 2017, having suffered from Alzheimers for several years.  She is survived by Bob, her children Beth and John and their children.

This biography was written by Caryn Douglas, drawing on resources from Mae’s funeral and personal correspondence over several years.