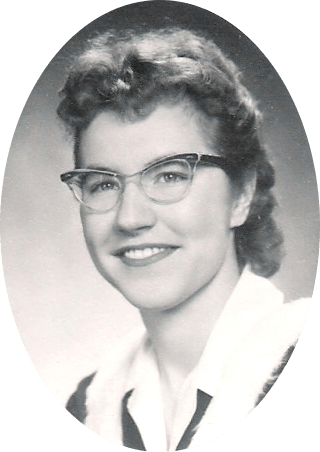 Elaine Harland Frazer
Back to Index 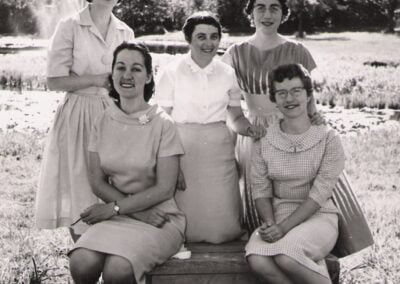 Picture with classmates at Maritime Conference in 1960 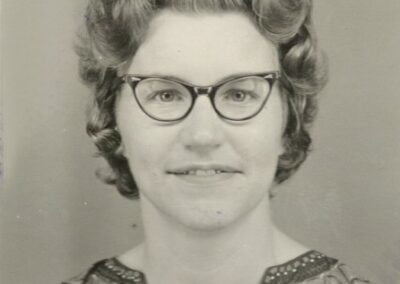 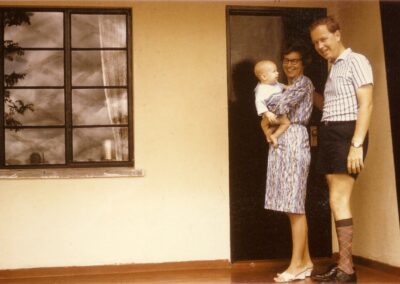 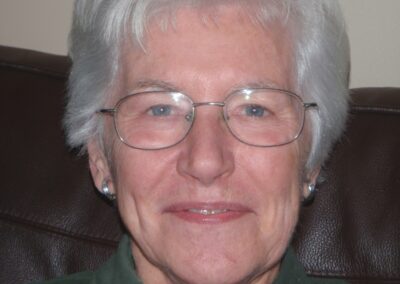 The following autobiography is created from the biography Elaine wrote in 1988 for the Association of Professional Church Workers and the address which she gave to the Annual Meeting of the Conference of Manitoba and Northwestern Ontario at the time of her retirement in 1997. Elaine was diagnosed with Alzheimer’s disease about 10 years after her retirement and she moved to Smith Falls, Ontario to be near her son Paul.  She died December 6, 2017.

I was nurtured in United Church manses in rural Saskatchewan and Manitoba, profoundly influenced by my parents and servants of God, Wesley and Agnes Harland and also shaped through CGIT Camp Brereton experiences. My call to ministry began when I was twelve years old at a CGIT Rally when I was touched by a vivacious missionary nurse, Edith Radley, who spoke glowingly of the Angolan people and their courage through hardships. That night I strongly felt God was calling me to Africa.

Opportunity to work for my room and board in residence at United College in Winnipeg enabled me to further pursue my education. Then, meeting up with the Principal of the United Church Training School (for Professional Church Workers) on a recruiting tour in Winnipeg, made possible the next step.  In 1958 I moved to Toronto.  Already having a degree meant I could do two years of the three year Theology course at Emmanuel College in Toronto along with other courses in Christian Education at the United Church Training School, earn the diploma and a Bachelor of Religious Education and then be designated as a Deaconess, now called Diaconal Minister.  My first appointment was Director of Christian Education at Wilmot United Church, Fredericton, New Brunswick. My work there included Church School, mid week groups and vacation bible school.  The congregation warmly and graciously accepted my inexperience for a one year term.

At Emmanuel, I met my life partner, Doug Frazer and in 1961 we were married.  Through the Division of World Outreach we prepared for service in Africa.  When we married I lost my status as a Deaconess because I was no longer working for the church.*  While Doug and I teamed during our time in Africa, the church was only officially employing him.  I was engaged in volunteer work which included teaching Religious Instruction for credit in High School, a course for teenagers who had left school on Christian Living through the YWCA.

How privileged we were to spend nine years in Zambia before and after Independence. There we were truly blessed through strangers who became God’s messengers to us: the Angolan refugees who after fleeing for their lives showed us the way of Christ as they lived with us for months, and, the Zambians who demonstrated exceptional grace and good will towards white racists who treated them so disgracefully.  So many strangers became angels, caring for us when our 16 month old adopted son Bruce died of leukemia, and rejoicing with us when our sons Paul and Garth were born.  Those Zambians who had so little materially gave us so much spiritually.

Upon returning to Canada the Division of World Outreach requested Doug’s financial expertise for a few years working with the Presbyterian Church in Trinidad. Again it was the very poorest people who through their generosity ministered to us. I again worked in a volunteer capacity with the Presbyterian Church of Trinidad.  The fun that I had with our part time maid, Joyce, was one of the highlights of my life there.  Well remembered is the warm acceptance of our family including our two small boys.

As a family, our first home in Canada was the manse of the Stonewall Pastoral Charge, just outside of Winnipeg, when Doug became minister there in 1973. During our eight year ministry the United Church was destroyed by fire and out of the ashes came new life and the present beautiful stone edifice to further enhance that fine community.  In 1975 I approached Manitoba Conference and entered into the process to be reinstated as a Deaconess and celebrated that with the Conference at the Annual meeting that year.

In 1981, Garth and Paul were going into Grade 9 and 10, we moved to Thunder Bay, Ontario, where Doug became minister of Broadway  Pinegrove Pastoral Charge. Soon after, I was invited to work part-time in Kakabeka Falls United Church, and thus I began in earnest in paid accountable ministry.

After Doug died of cancer in 1987, Broadway and Pinegrove called me as their minister. These three congregations were the Resurrection Community to me throughout Doug’s dying and death. Refugees from EI Salvador, Jose and Lissette who shared my home, are special angels and part of my family.

The last five years of my ministry (since 1992) have been with the Emo Devlin congregations in Northwestern Ontario (which include my parents and my sister and her family) – the charge my Dad served in the 1960’s! What a rich and fulfilling life it’s been!

Now, I’m looking forward to new learnings, different challenges, growing in grace through caring for my elderly parents, visits with my sons and their partners, and more fun.

For all the opportunities I’ve been given, for the fulfillment I’ve known and the love and support and joy I’ve experienced through so many of you through our awesome United Church, my heartfelt thanks.

*The disjoining rule, requiring Deaconesses to relinquish their status when they married was revoked in 1960, but women continued to be disjoined because they weren’t in active service.  Their diaconal work was not seen as ministry at the time, so Deaconesses were not seen as ministers.  The status was tied to employment.  This remained true until the 1980s.

This autobiography, written by Elaine in 1997 was edited by Caryn Douglas, May 2013.