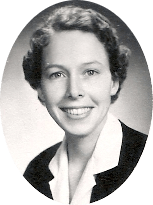 Alice (Brooksbank) Farquharson
Back to Index 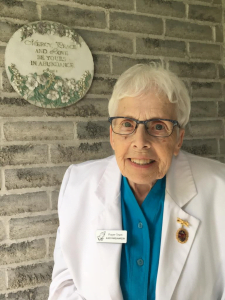 Alice Farquharson followed a common path for young women in the 1950s: after high school and Normal School (teacher’s college) she started a teaching career.  She enjoyed teaching, but she felt God was calling her to use her skills in the church, so she enrolled at the Training School and started the program in 1958.  Always a keen learner, Alice thrived.  She particularly remembered a 6 week summer placement in Cornwall, Ontario, working along side Deaconess Mary Ellen Nettle in the heady days of CE in the baby boom world.

Something else was heady about that summer: she met John.  By Christmas they were engaged and hopes of becoming a deaconess like Mary Ellen were dashed.  Alice graduated from the Training School and she and John were married in July, 1960 just a month before the disjoining rule was ended.  Alice, like many women at the time, either didn’t understand about the changes, or, understood that while the official rule was ended, the attitudes limiting Deaconesses were not going away that easily. In 1961 the headline on a second editorial by The Observer on the topic of married church workers, made their position crystal clear:  “God’s highest calling for a woman is still to be a wife and mother”.

Instead of church work, Alice returned to teaching, until her first child was born.  Alice enjoyed the lifestyle of being a farmer’s wife and a mother to her 4 children.  She used the knowledge and skills of her training as an active volunteer, teaching Sunday School and leadership roles with the UCW, and in Kent and Middlesex Presbytery camps and programs.

In 1984 Alice accepted her first paid ministry position, as Christian Education staff in a congregation, a position she filled for 4 years before returning to teaching.  In retirement she was very active in the activities of her church, and as late as 2015, in her 80s, she was hosting a summer Bible Study program.

In 2017, with assistance from her son, Alice asked the church to consider granting her some kind of recognition for her work.  Her classmate and friend Joan Gugeler, had been set apart in 1959 but resigned from the Deaconess List in the 1970s because she wasn’t working in the church.  Fifty years after first becoming a Deaconess, Joan sought reinstatement, which was granted in 2009.  Maybe this was in Alice’s mind. London Conference responded however that because Alice had never been a Deaconess there was nothing that they would do.

Alice, a woman with a very strong faith, died after a short illness at the age of 85, ready, in her own words, “to meet Jesus”.

To learn more about disjoining (the marriage bar prohibiting married women to be Deaconesses) visit uccdeaconesshistory.ca

This biography was written by Caryn Douglas in March 2018 drawing on a profile written by Joan Golden as a student assignment at the Centre for Christian Studies, 2004.