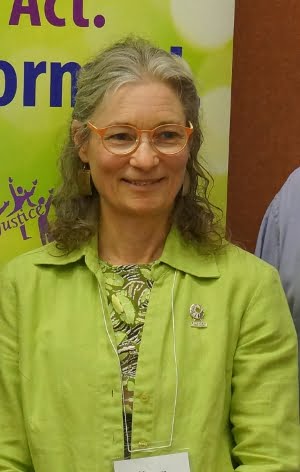 Caryn Douglas
Back to Profiles

I spent 3 amazing (tough and wonderful) years at CCS in the residential program from 1986 to 1989.  I actually lived in residence for 2 of the 3 years and that was a very gratifying experience as well.  Among those who were instrumental in shaping my formation when I was a student were Helene Moussa, Don Thompson and Wendy Hunt. After completing the diploma I did some further study at OISE and completed a Master of Religious Education at St. Michael’s College.  In 2009 I completed my Doctor of Ministry with a thesis examining the disjoining of United Church Deaconesses when they married and the apology given to them by the United Church.

I was a candidate for ordination in the United Church. In 1986, I was completing my third year as an outreach minister in a rural setting, where I was serving part time as a pastoral presence in a First Nations community and part time doing anti racism education in a southern Manitoba presbytery.  I was filled with lots of theological questions and eager to return to formal education.  Ted Dodd, who then worked for the Conference of Manitoba Northwestern Ontario Conference, urged me to reconsider my vocation and to look at the Centre for Christian Studies. He saw an aptitude and passion for diaconal ministry.  I had heard of diaconal ministry but hadn’t explored it seriously (this was before the days of a discernment committee).  When I got the material from CCS I was overjoyed!  The experiential educational model, the focus on feminist/liberation perspective, the intention to take my experience seriously, excited me.  When I met with Verna McKay, a diaconal minister in Winnipeg my heart leaped again: diaconal ministry was exactly what I wanted to do!  She spoke about her work with Aboriginal people, finding places where the church and the world met so she could facilitate intersection and about an emphasis on building relationships to effect long term change towards sustained justice.  Those ideas resonated with what I felt the gospel call was about.  I’ve doubted about my ability to stay in the church on many a day, but I’ve never regretted claiming the call to diaconal ministry.

I believe that ministry is the work of all the baptised, so in one sense I have been in ministry all my life.  I have been an active church member since I was a small child.

My first “recognized” ministry was as a lay person.  I served for a summer in a 4 point charge in northern Alberta, two of the points were First Nations.  I was in the community of Swan Lake and Carman Presbytery in Manitoba as an outreach minister for three years. I taught part time at CCS, in the diploma and continuing education programs, in my last year as a student, and after commissioning while working part time in a suburban new church development in the area of pastoral care and education.  I had 4 fulfilling years on the Program staff of the Prairie Christian Training Centre (PCTC, now Calling Lakes Centre) where I worked with teams of volunteers to plan and lead dozens of residential educational programs, especially in the areas of social justice and women’s concerns.  I did 2 years of interim ministry in a recent amalgamation of two pre union United Churches.  Working with an ordained colleague I focused on creative worship, all ages education and shared administration and pastoral care.  I was one year in an interim in a downtown outreach ministry.  I dedicated a decade of my life (1998 to 2008) building up the CCS community as Principal of the school.  Since 2008 I have been doing contract and part time work. I did the initial leg work on the establishment of the Designated Lay Ministry program, outlining the curriculum and designing the general pedagogy.  As contract staff with the Conference of MNWO I worked with a northern Manitoba Presbytery to do visioning work, worked on trying to relocate the General Council to Winnipeg, did stewardship education and some communication tasks.  I was awarded the McGeachy Scholarship in 2010 for a major piece of research on the lives of Deaconesses  (UCCDeaconessHistory.ca)

I have been privileged to spend a lot of time focused on diakonia and the diaconal community. I am very concerned about naming diaconal ministry for what it is, not to be caught in naming it in opposition to something else.  Diaconal ministry has a set of self proclaimed ideals and as diaconal ministers we try to hold ourselves accountable to them. Sometimes we succeed but we often fall short of the desired goals we set for ourselves, but the goals still define who we are.  In this way it parallels Christianity.  There is the gospel call and then there is the beautiful but imperfect band of those who try to follow it.  Claiming as a mark of Christianity a commitment to justice doesn’t in any regard diminish the reality that other faith communities might also claim such a commitment: so too with diaconal ministry.  If those who are called to lay ministry or to ordination also name for themselves the same goals as those of diaconal ministry, that is to be celebrated.

I think diaconal ministry is about a call to find oneself on the margins, wherever that edge might be. It is easier to see that manifest in street ministry, but there is always a margin.  At the margins are those with the least power: the children in the congregation, the sick or disabled in the work place, the slower learner in the classroom, the adult lacking self esteem.  The call in diaconal ministry is to be aware of those on the edges and to listen and respond for their best interest.  The question this reflection always brings to mind for me then is, “how did I use my power today?”  In making the everyday decisions about who to invite, which idea to choose or to reject, which priority for my time, who to include in consultation and consideration and so on, I am exercising my power and making a statement about where I stand; in the middle with the comfortable and more powerful or on the edge.  Many days I am saddened by my lack of follow through with my desires.  That is when the next important aspect of diaconal ministry comes in.  Membership in a community.

Diaconal ministry involves an accountability to others and to a stated and shared set of goals and aspirations.  I find it to be much easier and much more rewarding to conduct my ministry with this public forum for accountability and support.  To do this effectively, I need to be intentional about staying in touch with others, being involved in the communal aspects (locally, nationally, internationally) and seeking strong relationships.

I have had tremendous privilege in my life and ministry.  I love meeting with people, hearing their story, engaging with them as they struggle to make sense of their lives in the light of new understandings about God and humanity!  My current focus on documenting the lives of our foremothers has heightened my regard for the significance of women’s history.  I didn’t set out to be a diaconal historian, but it is a good place to find myself.  A few times I have thought, ‘the world is going to hell in a handcart and I’m looking in the family album’.  But I remind myself that documenting women’s lives, from their own telling of the story, is quite revolutionary.  Many of the women I speak with do not see how their lives are noteworthy, which is all the more reason to spend time recording them and reflecting on them.  Women in ministry is a rare phenomenon in the course of human history.  It is indeed noteworthy.